Seoul stocks inch up as investors wait for Fed decision

Seoul stocks inch up as investors wait for Fed decision 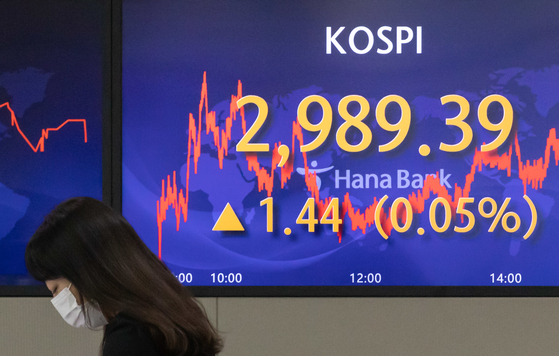 A screen at Hana Bank's trading room in central Seoul shows the Kospi closing at 2,989.39 points on Wednesday, up 1.44 points, or 0.05 percent, from the previous trading day. [NEWS1]


Seoul stocks ended higher Wednesday, but investors remained cautious ahead of the Federal Reserve's rate decision. The won fell against the dollar.

Investors are waiting on cues from the two-day Fed meeting, which ends Wednesday, to reorganize their portfolios amid the extended Covid-19 pandemic, analysts said.

Given their hawkish note in the run-up to the meeting, Fed policymakers on Wednesday are expected to unveil a quicker tapering of bond purchases, paving the way for earlier interest rate hikes next year.

Tech shares advanced in Seoul, allowing the Kospi to end in positive territory.

The local currency closed at 1,185.2 won against the dollar, up 2.6 won from the previous session's close.