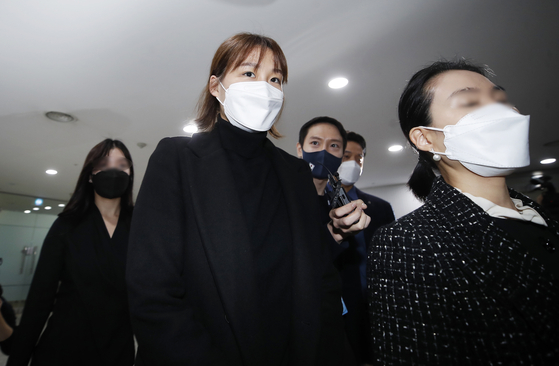 Cho Song-hwa arrives at a disciplinary committee meeting at the KOVO office in western Seoul on Dec. 10. [YONHAP]


Cho Song-hwa, the Hwaseong Industrial Bank of Korea Altos player that walked out on the club after an argument with the former head coach, apologized to fans and extended an olive branch to the beleaguered team in a statement released by her lawyer on Wednesday.

Cho's case is the third dispute in the history of Korea Volleyball Federation (KOVO) to involve legal counsel.

IBK announced Monday that the club had decided to terminate Cho's contract, despite a KOVO disciplinary committee refusing to intervene on the club's behalf. Cho's lawyer says she was never officially notified that her contract had been terminated.

"Cho only knew about her own contract being terminated through media reports," said Cho's lawyer. "Cho has not taken action on this matter because she has been trying to maintain a trust relationship with the club. We still want to communicate and work toward an amicable settlement."

Cho's lawyer claims that she was injured at the time of the controversy and needed to take care of her own health for her career as an athlete and that she had also notified her club and head coach of her condition, adding that Cho did not want to reveal this fact because she wanted to maintain a trusting relationship with the club.

The controversy began on Nov. 12, when Cho stopped turning up at Altos training or for games after a loss to the Korea Ginseng Corporation. The reason seemed to be due to a verbal argument Cho and former head coach Seo Nam-won had during and after the match, and in protest of the abusive environment created by Seo.

Following Cho's departure, the IBK sacked Seo on Nov. 21 and assistant coach Kim Sa-ni took over as interim coach. Kim also accused Seo of verbally abusing her, although Seo has since denied all allegations.

Kim only lasted three matches at the helm of the volleyball club, resigning on Dec. 2 after a match against Korea Expressway Corporation Hi-pass. Instead, Kim Ho-chul was appointed as the club's new manager on Dec. 8.

Despite the change in leadership, Cho didn't return to training, although IBK claim they asked her to come back for a game against Pepper Savings Bank on Nov. 23. Cho refused, and the club decided to release her, but the Korean Volleyball Federation (KOVO) blocked the attempt on the basis that Cho had not provided her consent.

At IBK's request, KOVO then called a disciplinary committee meeting on Dec. 2 to decide on Cho's future. The meeting was pushed back to Dec. 10 because Cho said she needed more time to prepare.

When the disciplinary committee did meet, it determined that there wasn't enough information available to establish that Cho had done anything wrong, refusing to discipline her. Despite that decision, the club has decided to go ahead and cut ties with Cho.

"Cho's claims are vastly different from the club's," IBK stated on Monday. "We have decided that Cho's actions are a major violation of the contract regardless of the committee's decision to withhold disciplinary action. We will release Cho as scheduled, according to the contract and KOVO regulations, regardless of the disciplinary committee's decision."

With the club choosing to release Cho without KOVO's backing, Cho may still be able to claim her remaining salary for the season if she is able to prove that IBK breached her contract.