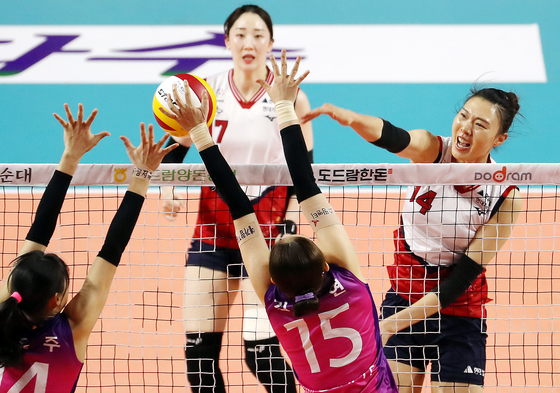 
Suwon Hyundai Engineering & Construction Hillstate are still looking like the team to beat this season, shutting Incheon Heungkuk Life Insurance Pink Spiders out on Tuesday to strengthen their lead in the women's V League.

Tuesday's 3-0 victory was Hillstate's sixth shut out victory this season. Hillstate have won 14 of their 15 matches, six of them in three straight sets. Only one of Hillstate's matches so far was won after five sets, the opponent surprisingly being the newest addition to the women's V League: Pepper Savings Bank AI Peppers.

Hillstate started out the season on the top of their game, winning their first 12 matches straight. However, Korea Expressway Corporation Hi-pass cut that winning streak last week, beating the top club 3-2 on Dec. 7.

Hillstate quickly bounced back, winning their next two matches to strengthen their solo lead on the standings. Hillstate took a 3-1 victory over runner-up Seoul GS Caltex Kixx on Saturday, then beat the Pink Spiders 3-0 on Tuesday.

The best scorer of the match was Hillstate ace and Olympian Yang Hyo-jin, who added 16 points to the club. Yang has added 249 points in her 15 appearances this season. The most points she added in one match was on Saturday, when she scored 23 points against the Kixx.

But Yang is best known for her blocking prowess, having topped the board for the most blocks for 11 consecutive seasons. Last season, the whole club took a blow with Yang’s diminished block form and finished at the bottom of the standings. This season, she is runner-up for blocks with a success rate of 18.3 percent.

Alongside Yang, Yassmeen Bedart-Ghani added 15 points for the club. Bedart-Ghani has the most aces so far this season and is runner-up in attack points. She has scored 319 points in 14 appearances.

Hillstate will next face the Korea Ginseng Corporation on Friday.