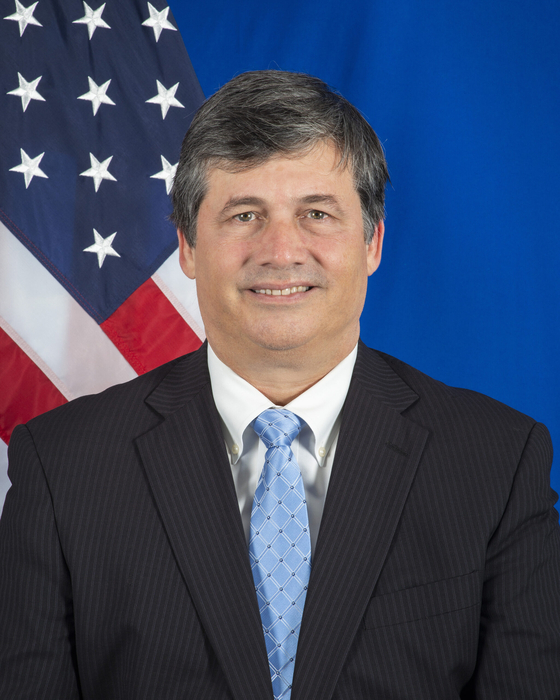 
The United States is unlikely to try to achieve a diplomatic breakthrough with North Korea during the Beijing Winter Olympic Games, Deputy Assistant Secretary of State for Japan and Korea Mark Lambert said during an online seminar Wednesday.

The remarks are likely to dash hopes in Seoul that the upcoming Olympics could provide a venue for the United States to restart talks with North Korea, just as the 2018 Winter Olympics in Pyeongchang, Gangwon paved the way for a flurry of high-profile summits between the North, South Korea and the United States.

Speaking at an online seminar hosted by the Los Angeles World Affairs Council & Town Hall (WAC), a non-profit organization that organizes speaker events and forums, Lambert called it “a moot question” to ask if the United States would try to talk to North Korea at the Beijing Games since North Korea’s athletes are barred from participating.

While the United States is participating in the Games, Washington will not be sending any government officials to the opening and closing ceremonies as part of a diplomatic boycott of the Beijing Olympics over an alleged campaign of human rights abuses and ethnic cleansing in Xinjiang, China’s northwestern-most region where Uyghurs and other Muslim ethnic groups make up a majority of the population.

Lambert, however, stated the willingness of the United States to meet with North Korea at any time without preconditions, reflecting his country’s official position since U.S. President Joe Biden took office in January.

“We're committed to the framework that was laid out in Singapore,” he said, referring to former President Donald Trump’s Singapore summit with North Korean leader Kim Jong-un in June 2018.

U.S.-North Korea dialogue stalled after the pair’s second summit in Hanoi in February 2019 ended without a deal.

Trump wanted the North to take measures beyond shuttering the Yongbyon nuclear complex, while the North demanded partial sanctions relief.

North Korea has since refused to engage in denuclearization negotiations with the United States, citing what it characterizes as U.S. hostility toward Pyongyang.

“We have no hostile intent to the DPRK, and even today we continue to make it clear to North Korea that we'll go anywhere at any time to talk about any aspect of a lasting peace and denuclearization on the peninsula,” Lambert said, using the acronym for the North’s official name, the Democratic People's Republic of Korea.

“Unfortunately, to date, we are not making any progress,” he acknowledged.

When asked about relations between South Korea and Japan, Lambert emphasized the need for the two U.S. allies to work closely together.

“Having our two closest allies in East Asia not cooperating as closely as they could make us less secure," he said, referring to the current chill in Seoul-Tokyo relations resulting from a series of retaliatory economic measures applied by Japan after a Korean court ordered Japanese firms to pay compensation to Korean forced laborers during Japan’s 1910-45 colonial rule of Korea.