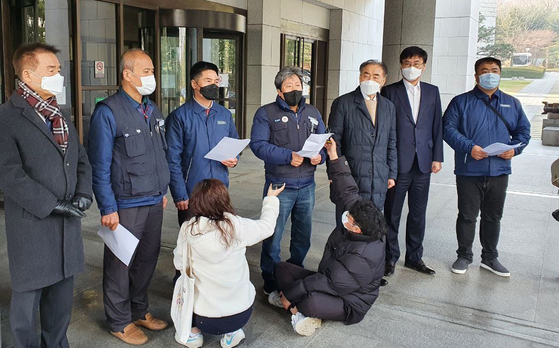 Hyundai Heavy Industries workers speak during a press conference in front of the Supreme Court on Dec. 16. [YONHAP]


The Supreme Court on Thursday sent back a case brought by workers at Hyundai Heavy Industries (HHI) against the company to the Busan High Court for a retrial.

The workers have been battling with the shipbuilding company for the last nine years, demanding that their bonuses be counted as part of their regular wage.

The suit was first launched in 2012 by workers demanding the company recognize their bonuses as part of their regular wages and requesting the company to retroactively cover the differences in legal allowances and retirement pay from Dec. 2009 to May 2014, by including bonuses when calculating them.

In Korea, many large-sized companies pay their employees bonuses and retirement pay based on their regular wage. If bonuses are counted as part of regular wages, the total used to calculate overtime, severance pay and other benefits would be higher.

HHI pays a total of 800 percent of workers’ monthly base salaries in bonuses every year. This includes a 100 percent bonus at the end of every even month, another 100 percent at the end of the year, and 50 percent twice a year for Lunar New Year and Chuseok.

The main issue of the suit related to whether employees violated the Civil Act principle of trust and good faith, which says one cannot exercise their rights when going against fairness and betraying trust between negotiating parties.

HHI argued that the workers’ demand violates the trust and good faith principle because if the bonus is counted as ordinary wages, the company has to shoulder a huge financial burden.

“It cannot be recognized that the additional payment will cause HHI a serious financial burden or threaten its existence,” the Supreme Court said. “Even if a company faces temporary financial difficulties, such issues can be predicted in advance if management makes rational and objective forecasts.”

“In that case, the company should not reject workers’ demands about due allowances based on the principle of good faith,” it continued. “The appellate court should have made the decision not only considering the difficulties the employer would face, as well as the ability to predict its difficulties or the capability to overcome the situation.”

The court also added that when looking at HHI’s performance through 2013, the shipbuilder’s financial situation wasn’t unstable enough that it would put itself in danger of failure if the bonuses were counted as ordinary wages.

HHI, however, immediately issued a statement, saying that it will explain its stance during a retrial.

“We respect the judgement of the court, but the ruling is contrary to our position,” the company said in a statement. “We will thoroughly make our case in the retrial."

Last year, the court ruled in favor of GM Korea and SsangYong Motors, saying that bonuses cannot be included as part of regular salaries and the workers’ actions violate the principle of good faith as the companies would face serious financial difficulties due to the excessive amount of additional payments that the labor unions were requesting.

Meanwhile, business lobbying groups have been raising concerns about the court’s ruling, saying it will harshly affect companies that have already been suffering due to the pandemic.

“When national competitiveness has weakened because of the delay of economic recovery due to the pandemic, the ruling will increase companies’ burden on labor cost and raise uncertainty in management,” the Korea Economic Research Institute (KERI) said in a statement. “There will be more similar suits from now on.”

“The Supreme Court defines the principle of good faith too narrowly. In this time when unpredictable crises and changes often occur like Covid-19, the unconvincing ruling will just cause conflict,” KEF said. “We urge the court to make reasonable judgements by respecting the relationship between management and labor unions and the fast-changing reality in the industry.”