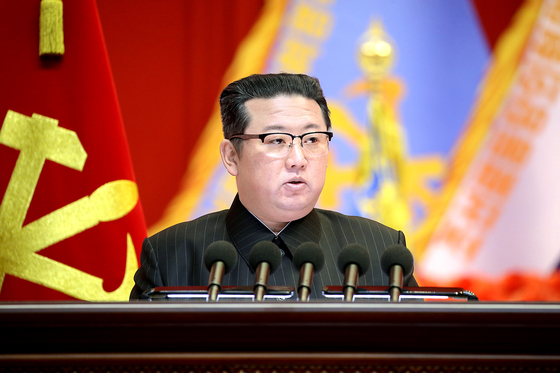 North Korean leader Kim Jong-un addresses the Eighth Conference of Military Educators of the Korean People's Army, held from Dec. 4 to 5 in Pyongyang. The photo was published in the Rodong Sinmun, the North Korean Workers' Party's paper. [NEWS1]


North Korea has kept quiet despite repeated callouts by the United States and the international community on its human rights violations.

Some experts in Korea think it may have to do with the timing of North Korea's year-end party meeting and leader Kim Jong-un’s New Year’s address.

Kim Song, the North Korean ambassador to the UN, protested the resolution before its passage, calling it an anti-North Korea policy and a collusion by the United States and the European Union.

But the usual rhetoric from the North Korean state media was visibly absent.

When the U.S. Donald Trump administration in December 2018 carried out sanctions against Choe Ryong-hae, then-leader of the Workers’ Party of Korea's organization and guidance department, and two other key aides of North Korean leader Kim for their human rights abuses, the regime published a statement the next day in its party’s paper, Rodong Sinmun, calling the sanctions “atrocious hostility against the spirit of the DPRK-U.S. summit in Singapore,” and Arirang Meari, another regime mouthpiece, called them “unacceptable political provocation.” DPRK is the acronym of North Korea's full name, the Democratic People's Republic of Korea.

Earlier this year when U.S. Secretary of State Antony Blinken called on the UN Human Rights Council to support resolutions “addressing issues of concern around the world, including ongoing human rights violations in Syria and North Korea,” the North Korean Foreign Ministry responded within a week with a statement condemning all countries “in the West” for using their human rights rhetoric to “try to rule the world by eliminating the countries that are offended by them.”

When the U.S. State Department issued a statement on April 28, on the occasion of North Korea Freedom Week, to “stand with the millions of North Koreans who continue to have their dignity and human rights violated by one of the most repressive and totalitarian states in the world,” the regime responded within four days, through a statement by its Foreign Ministry’s spokesperson.

“The fact that the United States blasphemed our supreme dignity this time is a clear signal that it is preparing for an all-out confrontation with us, and it gave a clear answer to how we should deal with the new U.S. [government] in the future,” the statement said.

The absence of such rhetoric from the regime this time around following several comments from the United States and the UN on its human rights records could be explained by the timing of the major events to take place in Pyongyang, according to some experts in Korea.

North Korea is to hold a party meeting near the end of this month, which will review the key policies of 2021 and decide on the ones for next year. Early next year, its leader Kim may deliver his regular New Year’s address, which usually contains the regime’s messages to the United States and South Korea. Kim skipped the address in both 2020 and 2021.

“Ahead of the year-end party meeting, North Korea appears to be making a last-minute review on whether to go into confrontation mode with the Biden administration or whether to open up the possibility of negotiations,” said Hong Min, researcher of North Korean affairs at Korea Institute for National Unification, a Seoul-based think tank, in speaking with the JoongAng Ilbo on Tuesday. “Pyongyang could be thinking that if it responds to the United States on its every action, the scope of its own future movements could be further reduced. That might be why they are keeping silent at the moment, which is at the moment drawing more attention [from the international community] on what its key external messages will be.”