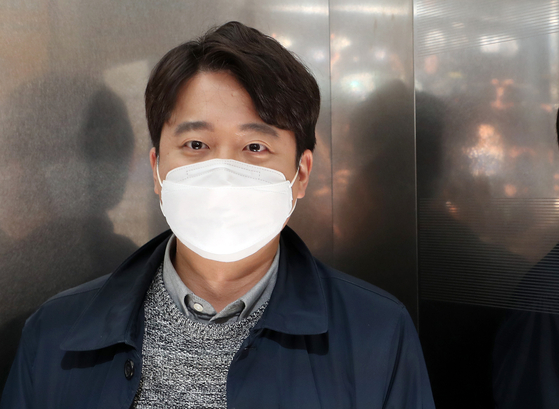 Lee Jun-seok, chairman of the People Power Party (PPP), steps into the elevator after holding a press conference Tuesday at the National Assembly in western Seoul announcing he will step down from all his positions in the PPP’s election campaign committee after clashing with a senior party official. [NEWS1]


Lee Jun-seok, head of the People Power Party (PPP), said Tuesday he will step down from all his positions in the main opposition party's presidential election campaign committee amid a heated feud with a senior PPP official.

The decision came after Lee, who has served as standing co-chair of the PPP election campaign committee for presidential candidate Yoon Suk-seol, and Rep. Cho Su-jin, a member of the party's supreme council who serves as the committee's public relations chief, clashed over the line of command within the party.

Lee said in a press conference Tuesday afternoon at the National Assembly in western Seoul that he has "no regrets whatsoever" on leaving all his campaign committee posts, which also includes overseeing media and public relations, but said he will continue to fulfill his role as PPP chairman.

He said, "If a member of the election campaign committee publicly says that she does not need to follow the orders of the standing chair of the committee, she is denying the need for that committee."

On Monday, Lee and Cho got into a loud verbal altercation in a closed-door meeting of the party's election campaign committee at the National Assembly, reportedly disagreeing on how to respond to allegations that Yoon's wife Kim Kun-hee falsified her credentials in her job applications.

Lee told her to do her job as communications chief to contain the situation, but Cho refused to take orders from Lee, saying she would only listen to presidential candidate Yoon.

Later, Cho shared with reporters a link of a YouTube video slandering Lee, questioning his mental health and calling on him to resign.

Lee on his Facebook page Monday evening asked why Cho can't just focus on her duties, calling on her to resign.

Cho later said she "apologizes to Chairman Lee" over Facebook, claiming she made a mistake sharing the YouTube link because she had been "so busy." Lee refused to accept the apology.

Yoon on Monday said such disputes "can happen when doing politics."

Eventually, Lee Tuesday morning sent an ultimatum to Cho, pressuring her to step down as the public affairs chief of the election committee, or else he would quit his post in the election campaign.

The PPP just recently appeared to put behind the internal rift between Lee and Yoon, who had been at odds over appointments to the party's election campaign committee and communication issues.

However, the latest altercation renews worries of cohesiveness within the party with just 77 days until the elections.

At the height of the feud at the beginning of the month, Lee canceled his official activities and embarked on a personal regional tour. Yoon and Lee reconciled in a surprise dinner meeting in Ulsan on Dec. 3, which also brought veteran politician Kim Chong-in on board as the general chairman overseeing the election campaign committee.

The dramatic reconciliation appeared to show the party's intention to overcome internal differences in a sign of unity ahead of the March 9 presidential election.

However, Lee said in the Tuesday conference, "If the Ulsan meeting gave someone a sense of responsibility to do their part taking into consideration the greater cause, it seems to have instilled a false sense of confidence in a group of people that they could do whatever they would like."

Lee said that the campaign could continue with the plans for media and public relations he has prepared so far "or scrap it altogether."

While Lee said the YouTube video had been the tipping point for him in deciding to step down from the campaign posts, party officials indicated that it was probably a culmination of disputes between the PPP chief and Yoon's close aides.

In response to Lee's press conference, Cho told reporters, "As one gets older, one should become wiser, and regardless of the reason, I'm really apologetic." She asked Lee to "reconsider" his decision.

Yoon and Lee had previously disagreed over the election campaign's recruitment of Lee Soo-jung, a professor of criminal psychology at Kyonggi University. PPP chief Lee had considered that Prof. Lee's appointment could alienate the young male supporters of the party, as she is considered a feminist by that demographic.

On Monday Shin Ji-ye, a 31-year-old feminist politician and a former Seoul mayoral candidate for the Green Party, joined Yoon's campaign, a move seen to appeal to young female voters. She has often clashed with Lee, who has appealed to young male voters in their 20s and has taken stances on gender issues viewed as anti-feminist.

Lee told reporters Monday that he hoped Shin would "play a role that doesn't go widely out of line with the policy of the party."