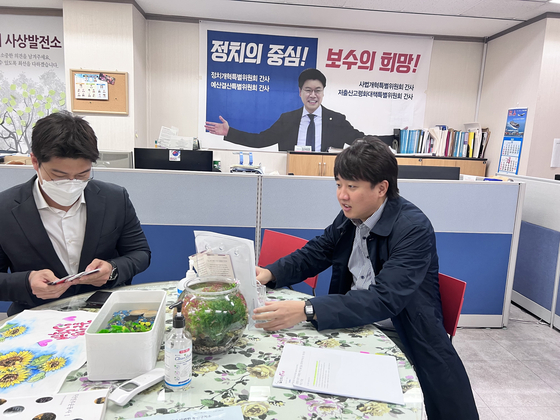 
After abruptly canceling all his official activities since Tuesday amid a growing rift with his party’s presidential candidate, Lee Jun-seok, head of the main opposition People Power Party (PPP), was spotted holding a late night meeting in Busan with a former National Assembly speaker.

Lee disappeared from the public eye for most of Tuesday amid a widening rift with the PPP’s presidential candidate Yoon Seok-youl, but re-emerged holding a private meeting with former National Assembly Speaker Chung Ui-hwa Tuesday night around 9 p.m. at Haeundae District.

He had switched off his phone and was not reachable for most of the day. Lee’s office had announced that all his schedules were canceled indefinitely.

Chung, a former five-term lawmaker, told media outlets Wednesday that Lee had asked to meet one-on-one, and that the PPP chairman expressed concerns about the election campaign’s appointments and party matters during their dinner talks.

“We shared our concerns about our party and the country,” Chung told the JoongAng Ilbo on his talks with Lee. “I advised him to be mindful to not show infighting within the party, and work on focusing on the [presidential] candidate.”

Chung said, “As the candidate does not have much political experience, I said that Chairman Lee should try to understand this and make an effort, and he listened.”

He also advised Lee to lend an ear to elder politicians and senior party officials and resolve issues “step by step.”

Lee visited Busan with his aides, and during his second day in the port city, he privately met with local party officials, including a visit to PPP Rep. Chang Je-won’s office in Sasang District, Busan.

Lee and Yoon have openly clashed over election committee appointments and coordinating schedules, amid indications that the young PPP leader was being sidelined by the campaign’s decision-making process. Lee’s sudden disappearance fueled speculation that he could be considering resigning as co-chair of the party’s election committee or even as the PPP chairman.

The internal feuding within the party has put to test the PPP’s leadership, with just three months till the March 9 election.

Lee has opposed the election campaign's recruitment of Lee Soo-jung, a professor of criminal psychology at Kyonggi University and advocate of women's rights, who he thinks will alienate his party’s male supporters in their 20s and 30s. Lee also called out Yoon for scheduling his three-day trip to Chungcheong this week without consulting him first.

Lee left a short Facebook post Monday evening which read: “If that is so, then this is it.”

When asked if he is considering meeting with Lee, Yoon, after meeting with businesspeople in Cheonan in South Chungcheong, Wednesday, avoided a direct answer and said, “I will think about it.”

He added, “Meeting and listening to many people in Chungcheong is the most important thing for me today.”

Later in the day, Yoon told reporters that Lee in fact is not refusing to do his job, as is being reported in media, pointing out that Lee is in charge of general public relations and media in the election committee, and that such campaign and party leadership duties are continuing to be carried out from Busan.