Big carmakers want to sell you a used car

Big carmakers want to sell you a used car 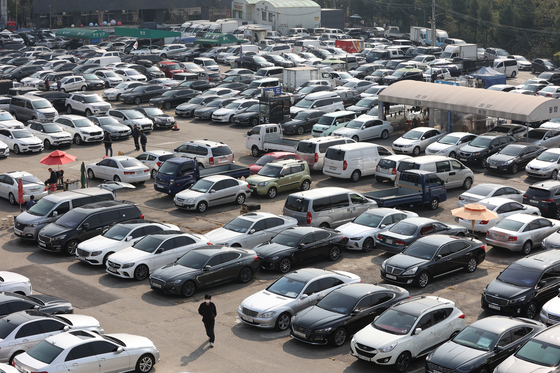 Korean automakers said Thursday they will enter the used car market next year, after taking a wait-and-see approach in the three years since a regulation prohibiting them from dealing in secondhand rides expired.

"Korean automakers will start registering for the business and acquire the physical space needed for car businesses from January 2022," said Jung Man-ki, chairman of the Korea Industry of Alliance Forum (KIAF) and the Korean Automotive Manufacturers Association (KAMA) during a forum Thursday.

"Regulation that prohibited big companies from entering the used car market to protect smaller players expired more than three years ago,” Jung said. “Although there is no legal ground to stop automakers from entering the market, we have been restrained from starting the business considering there have been requests from the industry to designate the business as suitable only for small players."

In 2013, the used car market was selected as a business suitable only for small and mid-size companies. That designation expired in February 2019.

Used car dealers again asked the Ministry of SMEs and Startups to redesignate the business for smaller companies, but that decision has been delayed.

"For the past three years, there were efforts to find a way for automakers and small companies to coexist, but a solution hasn't been found," Jung said.

Used cars from Korean automakers have, as a result, fallen into the hands of small and individual operators. With the secondhand car market poised to grow, the big automakers say a stricter system is necessary for transparent and fairer trades.

The number of newly registered used cars this year through November jumped by 46 percent year-on-year, according to the Ministry of Transport, going from 1.5 million units to 2.3 million units.

"For the past six years, the used car market was supposed to get it together and clean itself up, but it couldn't," said Lee Ho-geun, a professor of automotive engineering at Daeduk University.

"Now the customers are wanting the automakers and big companies to enter the market."

Kim Dong-uk, executive vice president of Hyundai Motor, said last year that the entrance of automakers into in the used car market is "necessary for the sake of consumer protection."

"Some 70 to 80 percent of people who have the experience of purchasing used cars say there are problems in the transaction process, quality of the car and its price," he claimed. "Automakers must do this business to protect consumers."

The regulations don't cover imported carmakers. Major imported carmakers, like Mercedes-Benz and BMW, provide their own used car certification service, where the dealers inspect and certify their branded used cars to prevent fraud and deception.