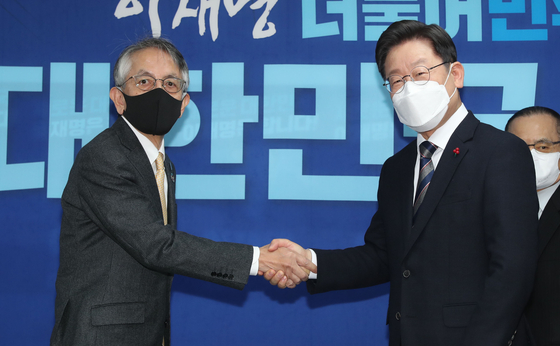 “Lee asked [the ambassador] that a message be conveyed to the prime minister suggesting a meeting as soon as possible for an open-ended conversation,” Kim told the press following the meeting between Lee and Aiboshi.

Asked whether Lee was proposing a meeting if he is elected president next March, Kim said, “I believe so, but there were no specifics discussed on the timing.”

It was the first meeting between Lee and Aiboshi.

“I have been looking forward to meeting you all this time and am glad to be finally meeting you today,” Lee told Aiboshi during the meeting. “They say that the relationship between Korea and Japan can be characterized as close but with its differences, but in the future, I hope that our bilateral relationship will become closer and friendlier.”

The meeting was held off-the-record after initial opening comments.

According to Kim, the rest of the conversation focused on how to steer the bilateral ties to be more “future-oriented.”

“The meeting was too short for the two to discuss bilateral issues in detail,” Kim said told the press. “But they agreed on the general point that bilateral ties should be steered in a future-oriented direction, and Lee emphasized that difficulties in bilateral ties only result in a lose-lose situation for both nations.”

Korea-Japan relations have sunk to a historic low in recent years over several controversial issues, including ongoing disputes over compensation for Koreans forced to work and women forced into sexual slavery in Japan during World War II.