Covid treatments will be coming to Korea

Covid treatments will be coming to Korea 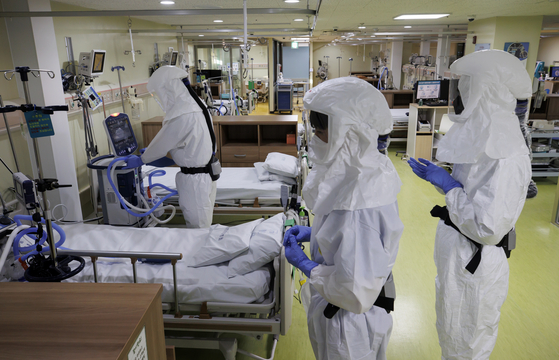 Medical staff members make preparations at the intensive care unit (I.C.U.) at Hyemin Hospital in Gwangjin District, eastern Seoul, on Monday. The hospital was among the first in Seoul to be designated as a Covid-19-only hospital earlier this month, as the number of patients in critical condition spiked and hospitals ran short of I.C.U. beds. [YONHAP]

“We signed contracts to purchase anti-viral Covid-19 pills for a total of 604,000 people,” said Lee Sang-won, a senior-ranking official of the Health Ministry, in a press briefing on Monday. “The contract with MSD is for 242,000 people and with Pfizer for 362,000 people.”

“We expect the pills from Pfizer to arrive in the country by as early as mid-January,” Lee said. “In principle, the Pfizer pills to be introduced in Korea will be administered according to that which is approved by the Ministry of Food and Drug Safety and under doctors’ prescriptions. Detailed dosing guidelines will be prepared as soon as possible in consultation with the medical community.”

The ministry said it is negotiating with the companies to sign contracts to purchase an additional 400,000 doses.

Korea's Ministry of Food and Drug Safety on Monday approved the emergency use of Paxlovid.

However, it said further review is needed on Molnupiravir.

“Regarding the efficiency and safety of the anti-viral pill by MSD, we need to make additional confirmations,” Minister of Food and Drug Safety Kim Gang-lip said during a press briefing on Monday. “The review on [Molnupiravir’s] emergency use has not been completed.”

Though it took the ministry just five days to complete its review on Paxlovid, the ministry has been reviewing Molnupiravir for the same purpose since Nov. 10.

Paxlovid will be allowed to be administered to adult patients with mild to moderate symptoms that show signs of possibly progressing to severe conditions, as well as to pediatric patients 12 years old and over who weigh 40 kilograms (88 pounds) or more, according to the ministry.

“The government expects that actively administering the pills will contribute to a reduction in hospitalizations and deaths of patients and contribute positively to the maintenance of the medical quarantine system,” Kim said. “But we have to emphasize that prevention comes before treatment […] as the pills work only in the initial stages of infection. Our strongest defense against the pandemic is vaccination.”

Over 80 percent of Korea’s population are fully vaccinated. 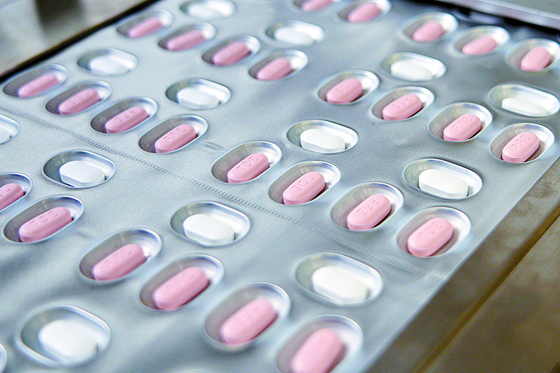 Korea is still in its fourth and largest wave of the pandemic, and, as of midnight Sunday, the country added 4,207 new Covid-19 cases, of which 82 were imported, bringing the total caseload to 611,670. The country's record-high for the number of daily cases was newly set on Dec. 14, when the country added 7,850 new cases.

Of Sunday's new cases, 69 were of the Omicron variant, 20 of which were imported — 15 from the United States, three from Spain, and one each from Canada and Tanzania.

The addition of 49 locally transmitted Omicron cases was the largest so far, since the first Omicron case was detected in Korea earlier this month.

Local clusters of Omicron outbreaks have been traced to a gathering of a church in Michuhol District, Incheon, and other local gatherings in Geoje, South Gyeonsang, Gangwon, Seoul, Busan and Ulsan.

“The most frequent channel through which the Omicron variant was traced to have spread was gatherings over food in restaurants,” said Kim. “A total of 33.3 percent of local Omicron transmissions were traced to gatherings at restaurants.”

As of Sunday midnight, Korea had a total Omicron caseload of 445, of which 181 were imported.

According to the Health Ministry, 87.4 percent of the country's total Omicron patients were below the age of 60.

The unvaccinated accounted for 40.4 percent of the Omicron patients, while those who had received booster shots accounted for 3.9 percent.

There has been no instance of an Omicron patient being admitted to the intensive care unit (I.C.U.) for severe conditions, according to the ministry.

After a month of relaxing its social distancing measures in November, Korea re-introduced them due to the continued spike in cases. These measures, which limit social gatherings to four vaccinated people, business hours of cafes and restaurants to 9 p.m. and requires all facilities where people gather to implement a vaccine pass system, will be in place at least through Jan. 2.

“There have been a number of clusters traced to day care centers and kindergartens,” said the KDCA in its statement on Monday. “We’ve also seen a spike in breakthrough infections among 18-year-olds, many of whom were fully vaccinated three months ago.”

A total of 55 people died of Covid-19 over Saturday and Sunday, bringing the total deaths to 5,300 and the death rate to 0.87 percent. 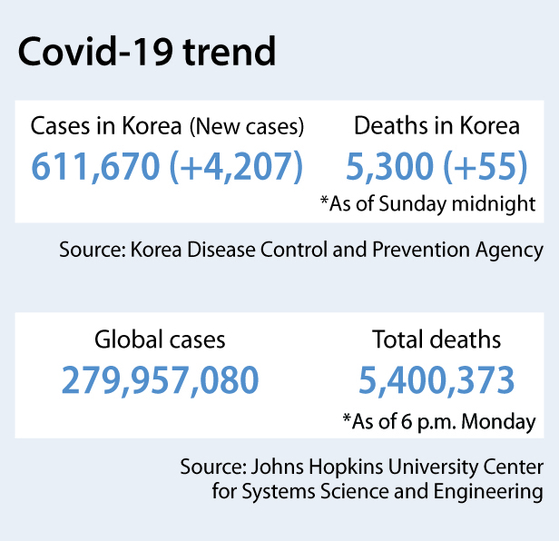