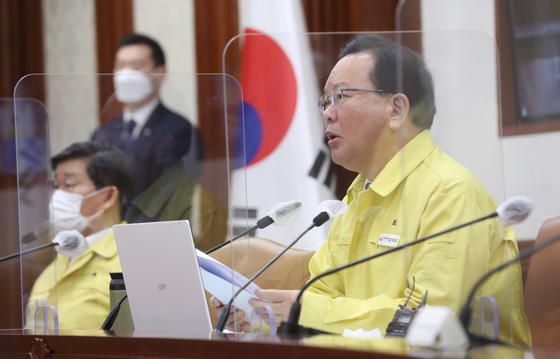 Prime Minister Kim Boo-kyum says that Korea is the final stage of signing a contract with U.S. drugmaker Pfizer to purchase its antiviral pills to treat Covid-19 during a coronavirus response meeting at the government complex in central Seoul Friday. [NEWS1]

Korea is in the “final stage” of signing a deal with U.S. drugmaker Pfizer to purchase its antiviral pills to treat Covid-19, said Prime Minister Kim Boo-kyum Friday, as the country broke its record high of critically ill patients set just the day before.

Kim said in a coronviarus response meeting that the Korean government has been negotiating with Pfizer to purchase more than 300,000 doses of its antiviral Covid-19 pill Paxlovid, more than the 70,000 doses previously disclosed.

On Wednesday, the U.S. Food and Drug Administration granted an emergency use authorization of Paxlovid, an oral antiviral pill for Covid-19 treatment that can be taken at home.

Korea's Ministry of Food and Drug Safety also said Wednesday that it has begun reviewing emergency approval of Paxlovid, seen as a possible game-changer in the fight against the coronavirus pandemic.

Health authorities also announced Friday that a Korean-made polymerase chain reaction (PCR) test that can detect the Omicron variant within three to four hours of diagnosis will be available starting Dec. 30.

The Korea Disease Control and Prevention Agency (KDCA) said the new PCR tests were developed through public-private cooperation and that they will be distributed across the country to local governments by Dec. 29 for use starting the following day.

Korea reached a new high of 1,084 critically ill Covid-19 patients Friday, though daily new cases remained in the 6,000s for a second day.

The previous record high for critically ill patients was 1,083 Thursday.

This was a slight drop from 6,918 cases on Thursday, though the prime minister said it was too early to determine if the transmissions are on a downward trend following the implementation of new social distancing measures last week, which put on hold the government’s “living with Covid-19” scheme.

There were 56 more fatalities, bringing the total death toll to 5,071, down from a record 109 deaths the previous day.

As of Thursday 5 p.m., 79 percent of intensive care unit (I.C.U.) beds across the country were occupied, compared to an I.C.U. occupancy rate of 84 percent in the Seoul metropolitan area.

One week ago, the government reinstated stricter social distancing measures nationwide limiting social gatherings and imposing nighttime curfews on many businesses, which will remain in effect until Jan. 2 to curb the spread of the virus over the Christmas and New Year’s holidays.

Under the measures, private gatherings are limited to four vaccinated people nationwide, while restaurants and cafes can operate until 9 p.m. Other businesses such as movie theaters that are considered lower risk can remain open until 10 p.m. Health authorities will review next week whether to extend the measures.

As of Friday, 85.5 percent of the population received at least their first Covid-19 vaccine dose and 82.3 percent are fully vaccinated, said the KDCA. So far, 27.9 percent received booster shots.