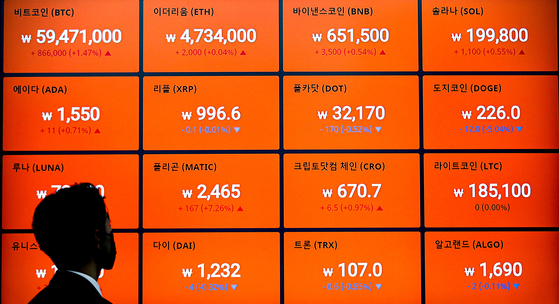 Cryptocurrency traded at Bithumb office in Gangnam, Seoul, in December. The NTS has changed the way it is taxing on virtual assets inheritance or gifting starting 2022. [YONHAP]


Cryptocurrencies inherited or received as gifts will be taxed based on their average daily value over the two months preceding the transfer, the National Tax Service said.

The new rule will come into effect next year and cover all virtual assets, which includes bitcoin and other cryptocurrencies.

These assets are currently taxed based on the value at the time of the inheritance or gifting.

As virtual assets are volatile, their value can change significantly from day to day.

Average value for taxation will be based on market prices at the four legitimate virtual asset exchanges operating in Korea -- Dunamu, Bithumb, Korbit and Coinone.

Even if the gifted asset is traded on another exchange, the market value on one of the four major exchanges will be used.

Stocks are currently taxed on the average value in the two or four months prior to being passed on by an estate or being gifted.

While the new taxation system only covers inheritance and gift taxes, it may also be used for capital gains taxes on virtual assets, which will go into effect starting 2023.

The government was planning to tax virtual asset investors on gains from the first day of 2022, but it delayed implementation for a year due to pressure from the Democratic Party.