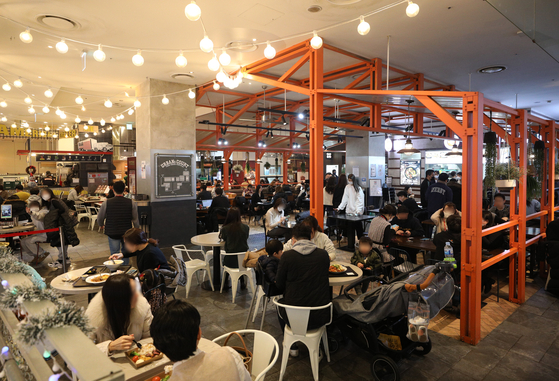 
Consumers have started to become less affected by the government's ever-changing social-distancing guidelines.

They are becoming more open to outdoor activities, such as going to the cinema or eating out, regardless of the toughening or loosening of government guidelines that change in accordance with the number of nationwide infections, according to an analysis jointly conducted by the JoongAng Ilbo and Tapacross, a data analysis company.

That number increased by 8 percent in September, when the government started laying out plans to loosen distancing guidelines for "Living with Covid," to 235,751 mentions.

The figure jumped by 18 percent in November, when "Living with Covid" began, but that was still fewer than in August when adults started getting their second vaccinations.

"The data show that people have become used to switching from hope to despair during the past two years," said Kim Yong-hak, CEO of Tapacross. "Rather than responding to the small changes in their lives, people are learning to prepare for a crisis while enjoying themselves."

The range of subjects discussed by online users varied and included traveling, shopping, interior decoration and dining out. Compared to before "Living with Covid," from June to August, and after, from September to November, mentions of cinemas, exhibitions and museums increased from 10 percent of the total to 20 percent.

References to near-Seoul suburbs rose by 29 percent during the same period, mountain climbing 25 percent, gyms 23 percent and picnics 22 percent. All the time, people expressed anxiety that "news of infections keeps coming," according to data.

Online users talked more about dining out and shopping at large retailers, rather than ordering at home, though this was accompanied by anxieties about whether the shopping outside would lead to more infections.

Keywords related to home decoration — such as table, sofa, curtain, mattress — became less frequently discussed online, while going to school was referred to 47 percent more. Meetings were talked about 46 percent more and offices 15 percent. They were followed by hopes that telecommuting and flexible working hours would continue post-pandemic.

"As the intervals of outbreaks shorten and people feel that the government does not provide a safety net for people, it's likely they will become more individualistic, and that will be reflected in their behavior," he said, adding it may lead to people saving up due to uncertainties and then spending big whenever they feel like they can.

"Even if Covid-19 subsides, people have become worried that another infectious disease may break out or they may face an environmental crisis," she said. "Many consumers will minimize their spending in their routine lives then relieve their stress by spending big from time to time."

Splurging before the election

Attacking their own (KOR)