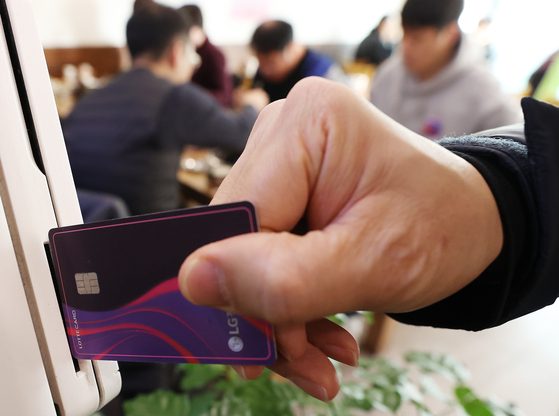 A credit card being swiped at a restaurant in Seoul in December. Despite relaxed social distancing regulation, concerns over the ongoing pandemic in November affected spending. [YONHAP]

Industrial production rose 5.9 percent on year in November as chip and car output rebounded, according to a release from Statistics Korea.

The figure was higher than October's 4.5 percent, though the strong reading was somewhat clouded by a mixed consumption reading and the uncertainties of the pandemic.

The broader measure of industrial output -- which includes the mining and
manufacturing of industrial production plus services, construction and public
administration -- was up 5.3 percent on year, following a rise of 4.8 percent the previous month.

Month-on-month, industrial output growth was the strongest in nearly a year and a half.

The average factory operating rate was 75.1 percent, up 4 percentage points compared to the rate in October.

Exports broke $60 billion for the first time in November, and were up 32.1 percent on year, while exports for full-year 2021 are on target to set a record.

Service output grew 5.3 percent on year and 2 percent on month, a turnaround from the 0.4 percent drop in October.

The consumption picture was mixed even as the government started to ease social distancing regulations in November, with the data showing that retail activity is choppy and volatile depending on policy and the spread of the virus.

"While retail sales have somewhat recoiled as it has been adjusted from the increases in September and October, service output increased sharply, especially in face-to-face service businesses, such as restaurants and hotels," Hong said.

"However, we're in a situation where we can't be content amid concern over the strengthened measures due to the spread of Covid-19. There are also external risks, such as supply-chain disruptions and inflation, due to the spread of Omicron variant globally," the finance minister added.

He noted the fall of consumer confidence in December. While the consumer sentiment index remained above 100 this month, indicating that more people are optimistic than pessimistic, it fell for the first time in four months.

The government expects the economy to grow 4.0 percent in 2021. That would be the fastest growth since 2010, when the economy grew at a 6.8-percent pace.