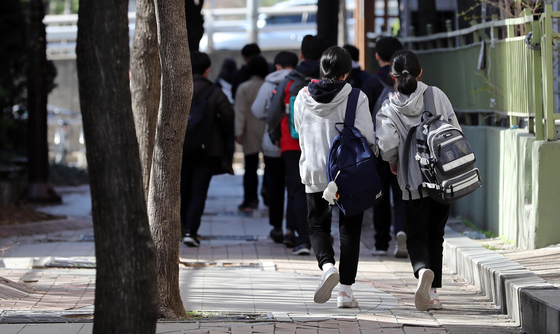 
The past year has been the age of “high teen fashion” in pop culture especially in Korea. One of the key elements of the look is school uniforms — stylized in retro plaid patterns with bright, vivid colors. These uniforms are usually tight-fitting with cropped blouses and short pleated skirts and a vest or blazer of the same pattern.

Directly influenced by American youth fashion from the 1990s to early 2000s, K-pop stars like Jeon Somi, STAYC and Sunmi have applied this aesthetic into their recent music videos and even daily outfits. Young women can be seen dressing themselves in such styles, especially in youth hotspots like Hongdae.

Aside from high teen fashion, the uniform look has always been a recurring concept in K-pop as it also elicits a pure, naïve image of the stars wearing it. This look is frequently seen in the beginning years of K-pop groups, like BTS, Exo and GFriend during respective debuts.

However, the high teen look and uniform styles do not appeal to students who actually have to wear them. Instead, they say comfort is key.

Shin Jee-ahn, a 15-year-old middle school student who lives in Incheon, says that while she's always chosen pants over skirts, nowadays she and her peers have taken to wearing tracksuits all day at school, as her school has not designated hoodies or sweatshirts as official uniform.

"Originally we weren't allowed to wear tracksuits to school [except for P.E. classes]," Shin said. "But everyone just started wearing them this past semester and the teachers are being more lenient now."

When asked why she favors tracksuits, she answered: "Because they're more comfortable." 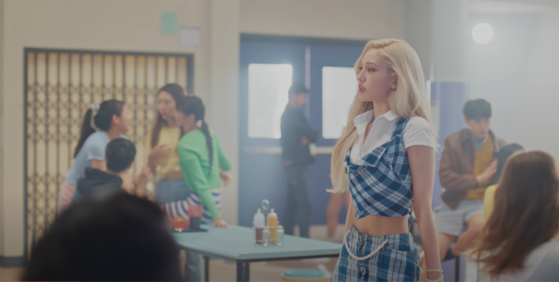 One of the key elements in the ″high teen″ look is school uniforms, stylized in retro plaid patterns and bright, vivid colors. The above screen capture shows singer Jeon Somi in her music video for ″Dumb Dumb″ (2021). [SCREEN CAPTURE]


A new addition to the standard school uniform emerged among students from the mid-2010s — sweatshirts. This option is offered by all four of the top uniform brands in Korea: Ivy Club, Skoolooks, Smart and Elite.

“In Seoul and the capital area, hoodie-style uniforms started making an appearance from around 2018 to 2019,” a spokesperson for Ivy Club told the Korea JoongAng Daily. “Now the design has branched out into sweatshirts, varsity jackets, fleece jackets and puffer jackets too, and more and more schools are adopting these designs made from various fabrics.”

According to Smart, uniforms were originally classified into two: the formal full set and the tracksuit. A classic example of the full set would be a button-down shirt and trousers for boys, and blouses and pleated skirts for girls. Both genders wear blazers and vests. This version is worn in the winter and fall, and a separate summer uniform would consist of a short-sleeved button-down shirt or blouse with pants or skirts of a lighter and breezier fabric. Tracksuits are worn during physical education classes. 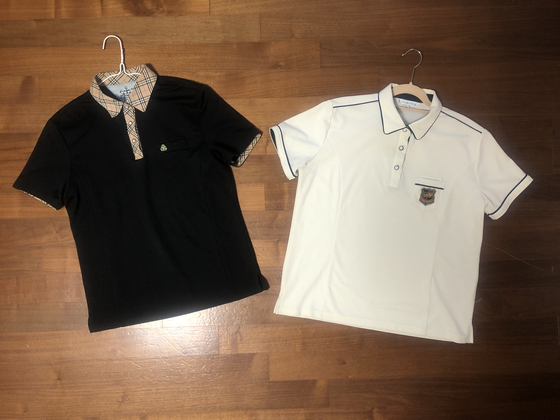 Casual wear, like these collared Polo shirts, are popular among Korean students as they are more comfortable than formal button-down shirts or blouses. [SHIN MIN-HEE]


In the early 2010s, circa 2011, uniform brands like Smart started mass producing casual wear. These are based on the collared Polo shirt and sometimes include shorts. Like its name intends, they are as comfortable as tracksuits, but are permitted to be worn alternatively with regular formal wear. Then came the sweatshirts — showing that what students value most in their uniforms was comfort.


Influence of hip-hop and K-pop


Since the 2000s, unofficial uniform trends underwent significant changes, influenced by the baggy, oversized look in hip-hop in the 2000s, and the tight-fitting, slim look frequently seen in K-pop in the 2010s. Comfort was relatively less of an important factor back then. 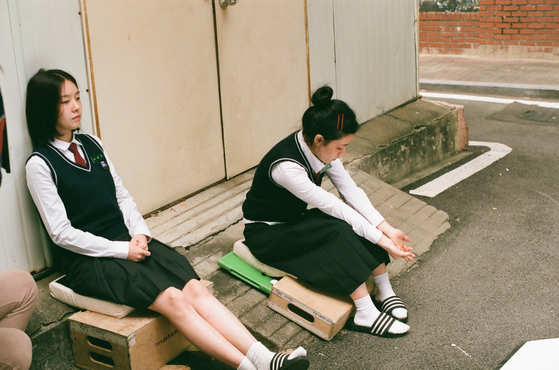 In the early 2000s, tight, short blouses and wide, long skirts of mid-shin length was a popular look among female students, shown right. This is a scene from the movie ″Snowball″ (2021), which is set in the 2000s. [ATNINE FILM]


“Hip hop had an impact in the early 2000s, making wide, baggy pants or long skirts the trend during that time,” a spokesperson for Skoolooks told the Korea JoongAng Daily. “In the late 2000s, boys were influenced by skinny jeans and wore tight-fitting pants with small leg openings — with a diameter of just 6.5 inches (16.51 centimeters) — and tight, short skirts for girls were in style.”

The store-bought skirt is about knee-length at first, but female students would alter them to shorten the hem length.

In 2015, girl group Twice and singer and producer Park Jin-young featured in a uniform advertisement that encouraged an overly short and tight look with phrases like “the corset blazer” and “compete with slimness!” The ad received backlash for “inappropriately promoting sex appeal to teenagers.”

This look was also parodied in the highly popular webtoon “Fashion King” (2011-13) by Kian84. The series took a jab at the fashion of Korean students in the early 2010s, like how there was an obsession over North Face puffer jackets and excessively tight pants for male students, which were portrayed like leggings. 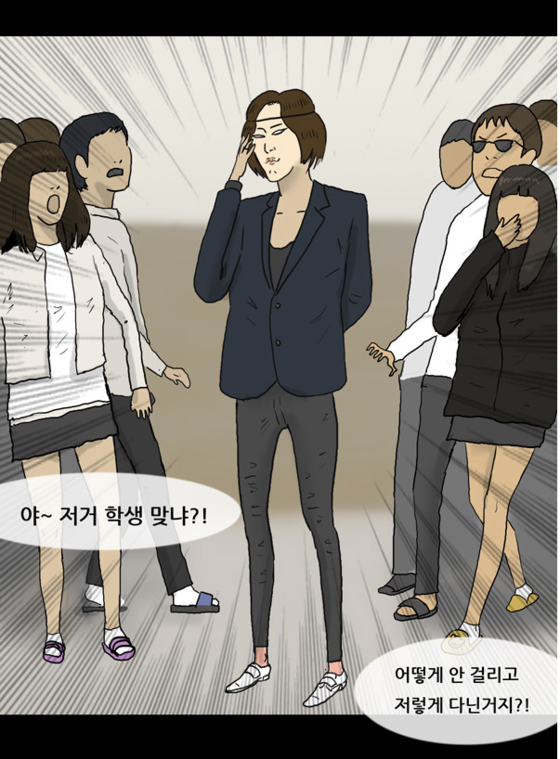 
If there is one thing pop culture and regular school uniforms had in common, it is that there has always been a tacit rule that “girls should wear skirts.” Every time female K-pop singers, including Blackpink and Twice, donned the uniform look, every single member wore a skirt. So in October last year, when girl group Weeekly performed its song “Zig Zag” wearing uniforms but with thigh-length shorts, it immediately sparked the interest of the public and many local news outlets, citing the look as “fresh” and “breaking gender stereotypes.”

Female students are eager to adopt the “genderless” look too, as shown through a survey conducted by Smart in February 2020. On its social media accounts, the uniform brand asked female students their opinions on wearing skirts or pants at school. A total of 3,094 students replied, and 2,074 (67 percent) answered that they usually wore skirts. Among the total, 1,682 (54.4 percent) said that they had felt uncomfortable while wearing skirts. The top two reasons were that they were cold in the winter (20.7 percent), and that it was uncomfortable how they had to be frequently cautious when wearing skirts (19.8 percent).

Over half, 1,600 (51.7 percent), replied that they would be willing to wear pants if it became normalized among their peers. 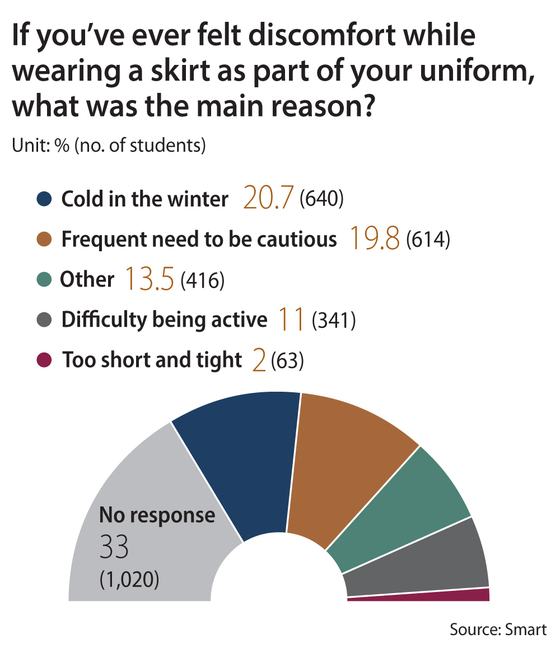 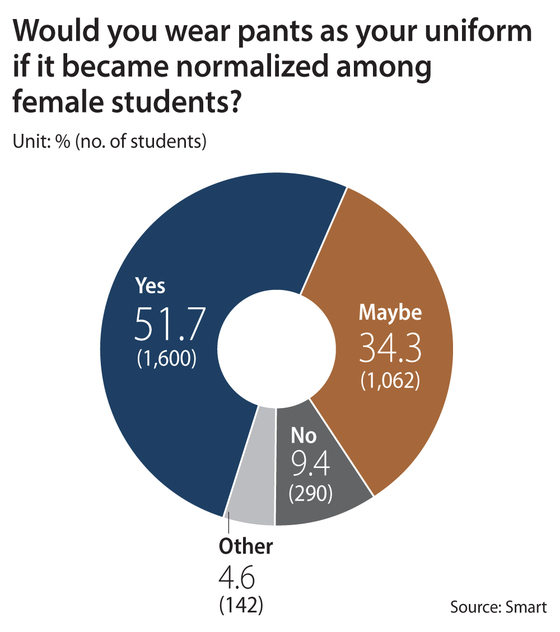 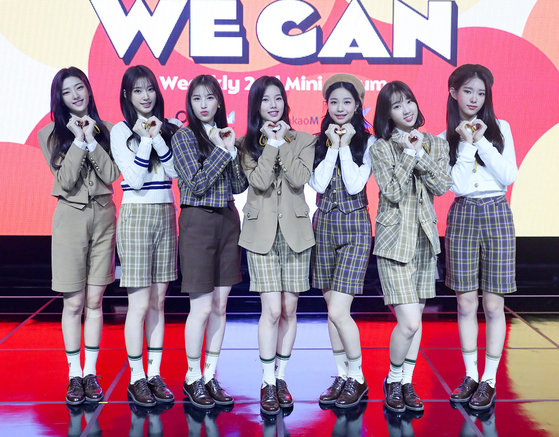 Girl group Weeekly wore uniforms but with thigh-length shorts and received praise by the public as being “fresh” and “breaking gender stereotypes.” [ILGAN SPORTS]

When the Covid-19 pandemic led to the rise of working from home, people started setting their eyes on comfortable leisure wear. But Smart, Ivy Club and Skoolooks all agreed that the pandemic hasn't played a role in the collective move toward comfier uniforms, citing that students were already favoring these looks before Covid.

Fashion critic Lee Dong-hyun thinks otherwise. Although comfort has been an issue that has been around for quite some time now, the influence of Covid-19 did indeed add fuel to this desire, he told the Korea JoongAng Daily.

Surprisingly, students have been utilizing comfort as a way to also express themselves more freely.

“Uniforms don’t represent individuality or diversity; they stick to bland, repetitive styles,” Lee said. “But students these days have their own styles and preferences. One could say street fashion is especially hot. Although school uniforms don’t go hand in hand with streetwear, students have a tendency to express that look through the uniforms they wear. So I guess you could say that’s why hoodies and sweatshirts [which are often seen in streetwear] are emerging as uniforms.” 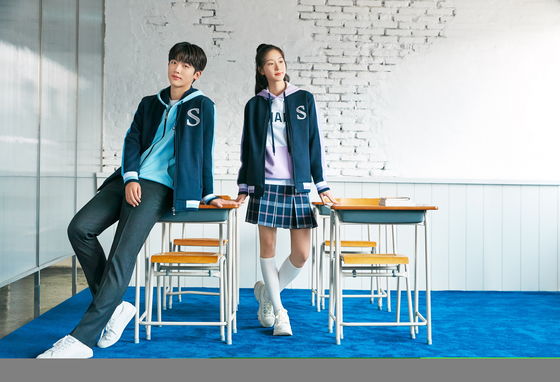 An advertisement for Smart, one of the four top uniform brands in Korea along with Ivy Club, Skoolooks and Elite. [SMART]

“I don’t think girls wear pants to express individuality,” Lee said. “I think female students want to wear pants because it’s easier to move around and be more active in them. If style was their foremost concern, then they would probably just continue to shorten their skirts to their likening instead. Pants allow freer movement than skirts so I believe that’s why uniforms are going for the genderless look now.

“And because of the pandemic, students have been unable to go to school as much as before,” Lee added. “They’ve been living more freely, so it’s harder for schools to try and force the ‘formal’ look on them anymore.”