The author is the deputy international and security news editor at JTBC.

One day in January 1697, a Dutch explorer landed in the Western Australia and headed to the Swan River. There, he was surprised to find black swans. It was a shocking discovery to the Europeans who only knew of white swans.

The black swan, which was called “devil’s messenger” because of its red beak and black feathers, had been on the brink of being wiped out. But it became famous in 2007 when Wall Street hedge fund manager Nassim Nicholas Taleb wrote the book “The Black Swan.” As he predicted the subprime mortgage crisis, he used the term “black swan” to refer to the “unexpected sudden adverse factor.” Later, it became widely used during the global financial crisis.

At the end of the year since then, investment banks and economic news outlets began to predict “black swans” for the New Year. Some of the “bad news scenarios” turned out to be true. One of the predictions in 2016 was Donald Trump’s election victory due to a possible U.S.-China trade war. The two countries actually engaged in a war without gunfire. Brexit was also considered a “black swan,” which also took place. 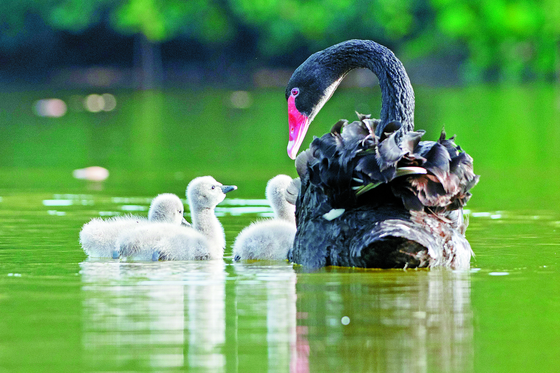 Three cygnets successfully hatched by a pair of black swans in the Lake at the Singapore Botanic Garden in December 2019. [XINHUA/YONHAP]


The Year of the Tiger has come. Last year, all of us struggled with unpredictable factors. We hoped to be free from masks after vaccination, but the new Omicron variant blocked it. It is common sense to get medical treatment when you are sick, but with a growing number of positive cases, we have gotten used to home care. A mother who was tested positive had a baby in the ambulance while moving to another hospital with an available bed.

The government restricted loans to control soaring housing prices, and those who were desperate to borrow money from banks struggled. Taxes went up, and the employment rate of college graduates was only 65.1 percent, the lowest since the survey began in 2011.

However, I still heard the news that an old couple in their 80s saved up from their basic living subsidies and made a donation; an elderly person in her 70s donating money from selling waste paper; and a “faceless angel” in Jeonju who continued to make a large donation for 22 years. Nassim Taleb said that a life is the result of an accumulated impact from a handful of significant events. I am sending applause to everyone who endured the turbulent year of the Ox.

Seeing through a platinum mirage

Seeing through a platinum mirage (KOR)