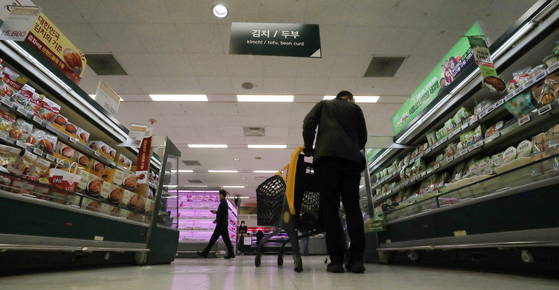 A shopper checks out groceries at a discount mart in Seoul. [NEWS1]


Prices of a wide range of consumer goods may continue to rise this year after the rapid increase in commodity prices last year, with the pace at a decade high, and the likelihood that inflation will remain a problem in 2022.

Meats are seen becoming 10 percent to 20 percent more expensive this year, while processed food prices are being steadily jacked up.

The prices of Ikea Korea's cabinets, bedframes, tables and rugs, about 20 percent of its total product lineup, will go up by an average of 6 percent. Polo Ralph Lauren and Vans raised prices as well, with products now up to 32 percent more expensive.

"The increase in raw material price and the supply crisis in the global market, along with the rise of labor costs in Korea, drove up overall costs," said Sung Tae-yoon, a professor of economics at Yonsei University. "There will be more pressure to increase prices, instead of being a temporary issue."

According to Statistics Korea, the CPI was up 3.7 percent on year in December. Prices of daily necessities — 141 products categorized to be necessary for everyday living — rose 4.6 percent on year.

The prices of 40 dishes most favored by Koreans when eating out jumped 4.8 percent, the most dramatic rise since September 2011.

Of the 40 items, prices of 39 rose. A bowl of galbitang — Korean beef soup — rose 10 percent on year in December. Coffee is the only item that didn't rise, which is due to the intense competition among low-cost coffee brands.

Meat prices, which went up 15 percent to 20 percent last year, will continue to rise in 2022 as the rise in grain prices drives up feedstuff costs and as the global demand for meat rebounds.

The price of American corn jumped some 45 percent last year.

Most of countries around the globe are suffering from inflation. CNN reported on Dec. 29 that "even though some bottlenecks have eased, the issues are not fully resolved," adding that "if this leads to a new round of lockdowns, it could once again change the way consumers spend and boost demand for stay-at-home goods."