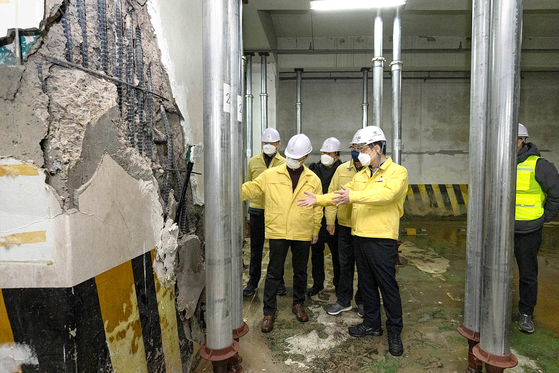 Officials from the Gyeonggi provincial government and Goyang city government on Sunday check the condition of the building whose supporting column was damaged on Dec. 31. [NEWS1]


After a column in the basement of a building in Goyang, Gyeonggi, was damaged on Dec. 31, leading to a portion of the road outside sinking and the evacuation of about 300 people, worries over a possible building collapse are rising and the public is requesting a thorough safety inspection over the city’s land on Sunday.


Around 11:30 a.m. Friday, rods in a supporting column in the third-floor basement of a seven-story building snapped, and the outside road leading to the entrance of the building’s parking lot sank. Occupants of the building and surrounding area were evacuated in case of a building collapse.

Goyang residents are calling for countermeasures, expressing fears that the ground's surface may be weaker in some of the city's neighborhoods including Ilsan District’s Baekseok-dong, Janghang-dong and Madu-dong — neighborhoods in which there have been incidents of the ground giving way within the past few years.

“The central government needs to do a safety inspection and come up with follow-up measures immediately, as a series of accidents regarding land sinking has happened in the past few years,” said Chae Su-cheon, head of a committee of apartment complex residents in the city.

“Given that similar accidents have happened before, the issue may not be poor column construction, but weak ground and structural problems.”

Immediately after the accident, the Goyang city government dispatched specialists to investigate the cause and to retrofit the structure to prevent any further sinking.

On Saturday, the specialists determined that there is a low chance of the building collapsing. They also added about 55 supporting structures in the basement to ensure its stability and set up 15 sensors to detect any vibration or movement within the building's structure. The building will be closed until further notice.

The road and walkway around the building whose basement pillar was damaged sank on Dec. 31. [GOYANG CITY]


Acting Gyeonggi Gov. Oh Byoung-kwon visited the accident site Sunday and asked the workers to do their best to clarify the cause of the accident and come up with measures to prevent any further destruction.

The Jungang-ro road in Baekseok-dong, only a couple hundred meters away from the damaged building, had experienced four different cases of its road cracking or sinking in 2017 alone, sometimes causing water from underground to leak to the surface.

Prof. Jang Suk-hwan of Daejin University’s department of civil engineering said some areas in Ilsan have a relatively weaker ground surface, due to its proximity to the Han River and the low ground level.