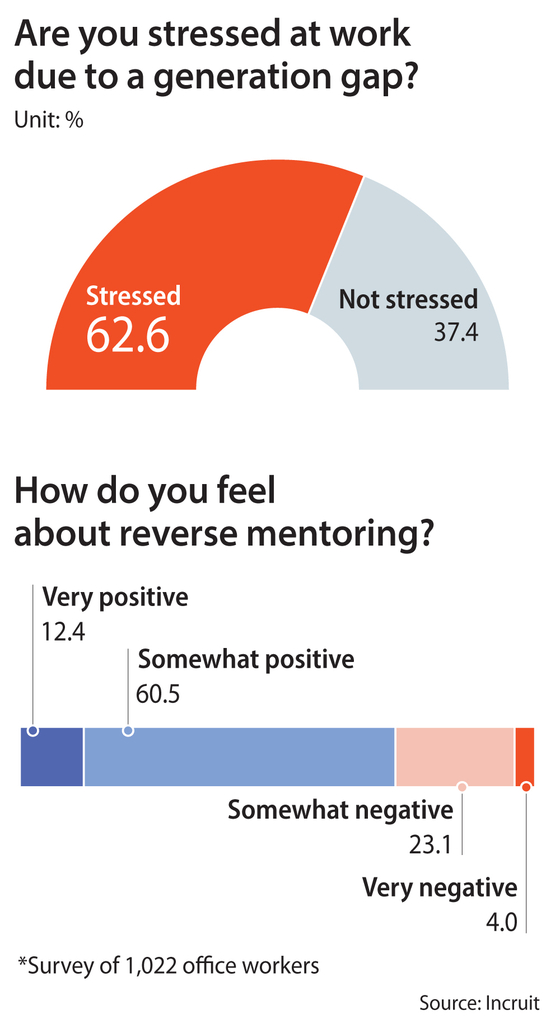 "Reverse mentoring" programs are being introduced by companies as they endeavor to facilitate communications across generations and work to make their reporting structures more horizontal.

Korea East-West Power (EWP), a state-run utility, started a reverse mentoring program October last year. Unlike regular mentoring sessions, where a senior employee teaches a subordinate, in reverse mentoring, it works the other way around: younger employees mentor the older.

A total of 48 employees participated, with 36 of them born in the 1980s, 1990s or 2000s. Those in management or executive positions were offered advice from their subordinates.

During the mentoring session, a team of three younger employees and one higher-level employee gathered at cafes and restaurants to discuss a range of topics that interested the young employees.

"Though we didn't have many opportunities to communicate with each other before, I felt more connected to my superiors after comfortably talking about topics I chose," said one worker in his 20s.

"We came to understand each other better after sharing our interests and hobbies during the conversation," said Kim Yong-gi, head the company's overseas division.

An increasing number of Korean organizations including public firms and government entities, which tend to have relatively hierarchical corporate cultures, are adopting reverse mentoring programs.

Young employees lead the sessions by selecting what to talk about and where to meet, while their superiors listen to their advice. The intention behind the program is to help employees and executives walk in each other's shoes.

EWP's Kim said that learning newly-coined words such as bukae, meaning a fictional extra personality, was a bit awkward, though "it was such a valuable opportunity."

"I believe that we should reform the vertical and hierarchical workplace culture of administrative organizations to be more horizontal and collaborative," Kim added.

A range of public firms and agencies, including Korail Networks, Korea Asset Management Corporation (Kamco), the Korea SMEs and Startups Agency, the Ministry of Patriots and Veterans Affairs and the Gunsan Fire Station are running reverse mentoring programs.

First introduced by Jack Welch, the late CEO of General Electric, in 1999, reverse mentoring recently came into fashion in Korea. Younger people have ideas and preferences different from older Koreans, and the number of workplace conflicts increased. Many companies used reverse mentoring programs as a part of efforts to narrow the generation gap.

Private firms such as Kyobo Life Insurance, Shinhan Life Insurance and LG Energy Solution have already been actively encouraging reverse mentoring, as young employees are going to be the people leading the company as well as the market.
According to a survey of 1,022 office workers conducted by job search website Incruit, about 73 percent of respondents were positive about reverse mentoring.

Older people are more open to the idea. A total of 67 percent of respondents born between 1980 and 1994 said they were positive on the idea, while 85.1 percent of those born between 1955 and 1979 answered the same.

"The survey shows that while millennials think of the reverse mentoring program as a chance to communicate with other workers, the workers see it as a way to create an open corporate culture," said Jeong Yeon-woo, manager at Incruit's brand communication team.

"Reverse mentoring innovates the workplace culture to become more up-to-date, agile and innovative," Kim Yong-chun, head of the employment policy team of Korea Economic Research Institute, said. "If older employees are forced to accept the younger employees without any actual improvement in the work method and system, the program will only have a marginal effect on corporate culture change."