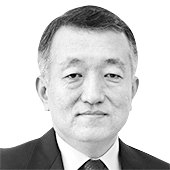 
Korea’s past presidents were familiar faces. People were acquainted with them when they cast their vote. Still, they discovered that they did not know enough, because the presidents entirely changed upon inauguration. Presidents Roh Moo-hyun was unstable, Lee Myung-bak self-righteous, Park Geun-hye uncommunicative, and Moon Jae-in stubborn beyond imagination. “Their brain change entirely after taking power,” wrote Kang Joon-mann, a liberal political critic and a professor at Jeonbuk National University.

Compared with our past presidents, we know little about presidential candidates Lee Jae-myung of the ruling Democratic Party (DP) and rival Yoon Suk-yeol for the opposition People Power Party (PPP). Therefore, we cannot imagine how they will change upon taking office. We had better brace ourselves for a streak of stupefaction. Their names have come up just a few years ago. Lee, former Gyeonggi governor, was an ambitious local government head who went spendthrift with people’s tax money with sensational policies. Yoon, a senior prosecutor specialized in political investigation, had a knack of sending high-profile figures, including two former presidents, to prison. They appear strong in the public eye, but few are aware of their real character.

Once they into the limelight as presidential candidates for two mainstream parties, it was one bewildering act after another. People began to worry if they are really entitled to mighty presidential powers. Skepticism turned into apathy. In a poll, more than half the voters — 56 percent — wanted the two candidates to be replaced. Seemingly unaware, they went on attacking the weaknesses of one another only aggravating public disgust in both. Kim Chong-in, head of the election campaign committee of the PPP, advised them to stop negative attacks and the shift focus back to the economy and the national future. But bearing with them after knowing their faults is different from not knowing them at all.

Voters are at a loss due to lack of choice. It remains uncertain whether Lee is free from the Daejang-dong development scandal, related to a project he designed and approved. He denied being close to Yoo Dong-kyu — the former head of Seongnam Development Corp. at the center of the scandal. Lee even distances himself from a son accused of gambling. Lee admitted to plagiarism in his thesis for a master’s degree at Gachon University and asked the school to cancel his degree “as he did not really need it.” He is not ashamed for his plagiarizing act and claims he does not need the degree. Can we have faith in someone like that?

Yoon has been trailed by a never-ending scandal related to his wife and other relatives. Kim Chong-in — Yoon’s campaign chief — vainly tried to defend him. “The election is about voting for a president, not his wife,” he said. But the country has suffered enough with acquaintances of presidents interfering and injuring state affairs. Kim Kun-hee, his wife, was also arrogant to think that the falsehood about her credentials did not matter. She only apologized upon escalated public criticism. Her belated teary apology received a cold response as it merely sounded like whining to win votes for her husband.

It’s hard to understand the visions for governance by the presidential candidates. Lee chants about an “inclusive nation” and Yoon a “fair economy.” But their slogans are figurative. They are keeping mum on the details — wealth polarization, demographic challenges from few births and fast aging, pension reform, labor reform, and deregulation, to name a few. Upon meeting with unions, they promise labor-friendly policies, and upon meeting businessmen, they vow business-friendly ones. They offer to cut taxes and increased allowances for those in need. They merely chase votes without policy vision.

People are jittery about the new year. They worry corrupt ringleaders as those involved in the Daejang-dong development project could stain state affairs if Lee becomes the president. The country could end up much like a bankrupt Latin American state. If Yoon becomes the president, he could reinforce the power of the prosecution. The his campaign camp could wield influence to fatten their interests over the next five years. We hate to visualize the consequences of the mighty power under the two.

The candidates must prove their eligibility and dignity to become a national leader. They must become honest and modest and demonstrate it. They must be frank with the allegations around them and apologize and become accountable if necessary. They must specify what they will do and not do. The voters will judge.