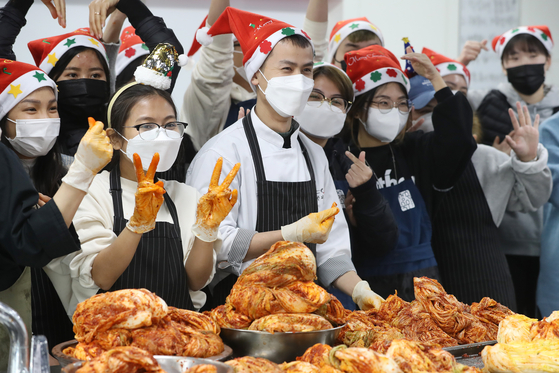 
Annual exports of agricultural and fishery products exceeded $10 billion for the first time ever, hitting $11.36 billion last year, up 15.1 percent.

Exports of agricultural and livestock food products totaled $8.54 billion last year, up 12.9 percent on year, according to the Ministry of Agriculture, Food and Rural Affairs on Wednesday.

Exports of fishery products jumped 22.4 percent during the same period to $2.82 billion, according to the Ministry of Oceans and Fisheries.

It is the first time the combined total of agricultural and fishery product exports broke $10 billion since the relevant data were first compiled in 1971.

Kimchi and ginseng exports grew in part due to pandemic-related demand, as the products are seen by some customers as healthy.

Kimchi exports jumped 10.7 percent on year to a record $159.9 million, while ginseng exports climbed 16.3 percent to a record $267.2 million. Demand was particularly high in the United States, Japan and Southeast Asia.

Demand for ramyeon, sauces and processed foods was also high.

Strawberries and grapes were among the most popular. Combined, their exports totaled $103 million.

Strawberries were well received in Hong Kong and Singapore, while premium grapes sold well in China. One bunch of grapes, for instance, sold for 120,000 won ($107) in China.

In terms of fisheries products, laver maintained the No. 1 export position.

The government said laver exporters worked hard on receiving various certifications, such as those confirming that the products are vegan or organic.

Oyster exports to Japan declined 11.1 percent on year, but the exports of the product to the United States jumped 42.9 percent and to Hong Kong 29.4 percent.

The ministry "will do its best to continue the rise in export of agricultural products like conducting Korean Wave marketing and segmenting strategies in different countries depending on the pandemic status," said a spokesperson for Ministry of Agriculture, Food and Rural Affairs, adding that the ministry will further promote the export of strawberries, grapes and kimchi.

A spokesperson for the Ministry of Oceans and Fisheries said the ministry will "strengthen export policies for fisheries companies, like hosting an online fishery exhibition."