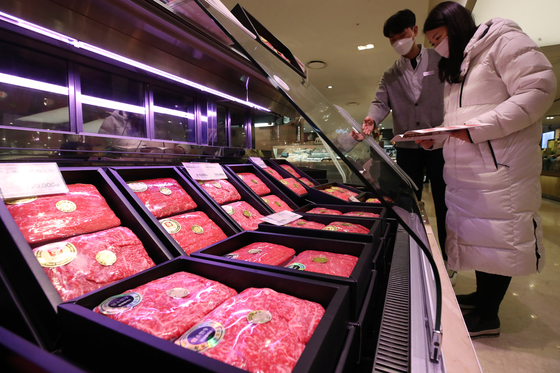 Gift sets of Korean beef, or hanwoo, for Lunar New Year are displayed at a department store in central Seoul on Jan. 18. [YONHAP]


Korea said Tuesday it has decided to ease the existing anti-graft law over the upcoming Lunar New Year's holiday.

Under the revision, the ceiling on the value of gifts that can be received by public servants, educators and journalists will be set at 200,000 won ($180), according to the Anti‑Corruption and Civil Rights Commission and the agricultural and fisheries ministries.

The country's anti-graft law, which took effect in September 2016, bans them from receiving free meals valued at over 30,000 won, gifts worth more than 50,000 won and congratulatory or condolence money of more than 100,000 won.

The rule will be eased from Tuesday to Feb. 14.

The ceiling on agricultural and fisheries products is set at 100,000 won.

Violators could face a maximum sentence of three years in prison and a fine of up to 30 million won. The act, which aims to root out corruption and irregularities in Korean society, affects 4 million people.

While Koreans normally visit their families and relatives over the Lunar New Year's holiday, fewer people are expected to travel across the country this year due to the Covid-19 pandemic, which is also expected to deal a harsh blow to demand for agricultural and fisheries products.

Jeju was packed with tourists on Lunar New Year