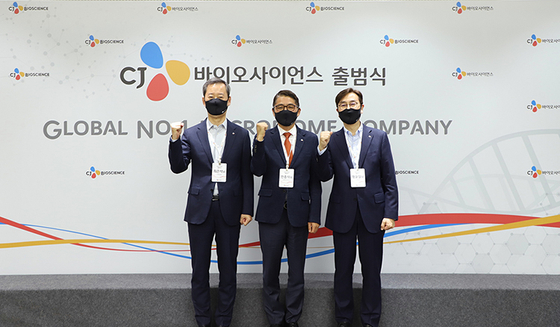 The subsidiary’s focus will be drugs and health supplements based on microbiomes, a term referring to genetic material in microorganisms. According to the company, microbiomes are used in drugs that treat digestive disorders, obesity, diabetes, cancer and Alzheimer's.

The CEO of the new company will be Chun Jong-sik, founder of local microbiome research company ChunLab.

It acquired a 75.8 percent stake in Dutch bio firm Batavia Biosciences in November.

CJ Bioscience will focus on research and development in the cohort study stage, a clinical process involving specific trial groups, to acquire more microbiome data. The company says it will be able to speed up the development of new drugs and the success rates of its clinical trials.


Apart from drugs, it will aim to manufacture and sell health supplements. It will also expand into the next generation sequencing sector, an area that determines the genetic sequence of DNA and RNA to study genetic variations related to diseases.

The company will also try to get contract and development manufacturing organization (CDMO) deals.

“In the next two to three years, we will aim for the pipelines of our cancer and autoimmune disease treatments to start U.S. Food and Drug Administration’s phase 1 trials and license them out through joint research with big global pharmaceutical companies,” said CEO Chun.