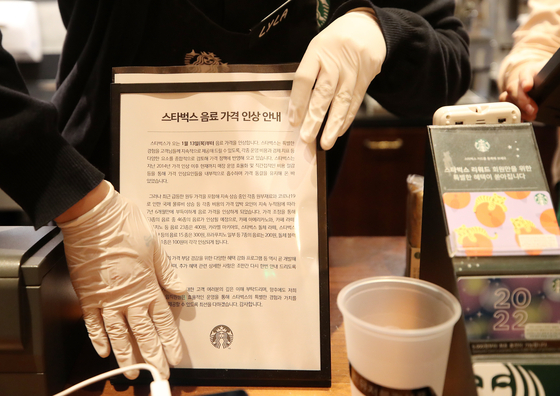 A Starbucks barista on Friday puts up a notice saying the coffee chain will raise prices starting Jan. 13. [NEWS1]


Starbucks and Dongsuh Foods both announced they would be increasing their coffee prices, a first since 2014.

SCK Company, which runs Starbucks Coffee in Korea, announced Friday that prices of 46 of its 53 drinks will rise starting Jan. 13.

The prices of 23 drinks including its Americano, latte and cappuccino, will rise by 400 won (33 cents). Another fifteen, including its caramel macchiato and dolce latte, will rise by 300 won while seven frappuccinos will an increase of 200 won and the dolce black milk tea of 100 won.

People who bought or received Starbucks gifticons — mobile coupons that can be exchanged for coffee — before the price increase will be able to use them without paying any difference.

Following many other food manufacturers surrendering to inflation, the coffee chain stated the surging price of coffee beans, raw materials and international logistics costs as reasons behind the increase.

It also said that it will provide more benefits to customers so the price increase will feel less harsh, but specific dates or details were not announced.