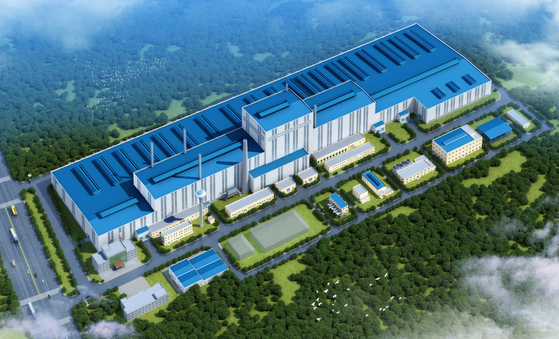 A computer rendering of an automotive steel sheet factory in Tangshan City, Hebei Province, which is being built by steelmakers Posco and China’s HBIS. The plant will have an annual capacity of 900,000 tons and is scheduled to be completed by the end of 2023. [POSCO]


Ground was broken Friday on an automotive steel sheet factory in Tangshan City, Hebei Province, China, which is being built by Posco and HBIS, China’s second-largest steelmaker.

The two companies in September formed a 50-50 joint venture to cooperate in building automotive steel sheet plants in China and marketing the steel sheets there.

The facility will have an annual capacity of 900,000 tons, Posco said, and construction will likely be complete by the end of 2023.

HBIS is the second largest steelmaker in China and the third largest in the world, with an annual capacity of around 44 million tons as of 2020.

Posco believes the partnership with HBIS will help it secure a stable supply chain of automotive steel sheets, for which demand is constantly rising in China.

China is the No. 1 automobile maker in the world, producing 25 million units, or 32 percent of the world's total production, last year.

“Based on the technology and experience the two companies have acquired, we will upgrade the production capacity of automotive steel sheets,” Choi Jeong-woo, CEO of Posco, said during a groundbreaking ceremony held online Friday.