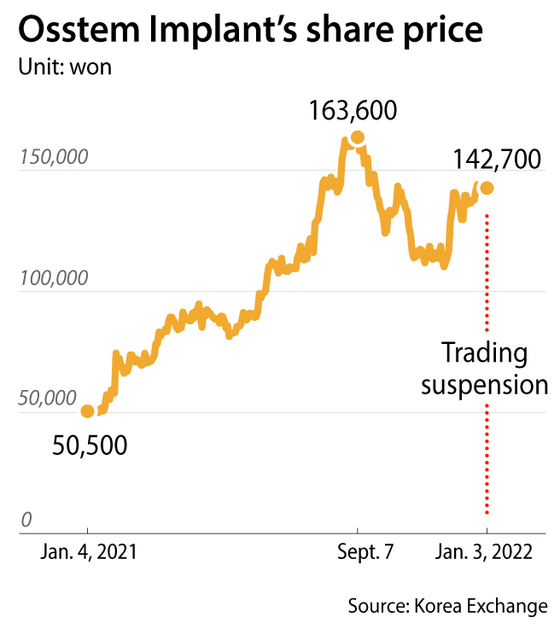 One of the employees at the company, a 45-year-old who was in charge of managing corporate funds, has admitted to embezzling 188 billion won ($158 million) from the company, which led to the indefinite trading suspension of Osstem’s shares on the Kosdaq market since Jan. 3.

The Korea Exchange (KRX) will decide by Jan. 24 whether it needs an eligibility review to lift the suspension on Osstem.

Although the main suspect has been arrested, it remains uncertain whether this will have any impact on the suspension of the company.

“It is true that the police arrest will make it easier for the company to recover the embezzled money,” a spokesperson at KRX said, “but the KRX’s decision will be made based on a comprehensive review covering a range of factors such as the company’s management transparency and the context of the embezzlement.”

Even if it does re-emerge on the market, its share price will likely take a tumble.

The embezzled money accounts for 91.8 percent of the company's equity of 205 billion won. There is a possibility that any amount that is not recovered will be booked as a non-operating loss.

According to Korea Securities Depository, 19,856 minority stakeholders of Osstem Implant own 55.57 percent of the shares.

Osstem Implant was the 19th largest among Kosdaq-listed companies before its trading was suspended, with market capitalization of 2.39 trillion won.

Investors who got loans collateralized by Osstem stocks now have to repay the remaining debt.

“Though the lenders would not be able to sell the collateralized stocks if Osstem remains suspended from trading until maturity, borrowers will be charged with late payment interest if they fail to repay the debt,” an industry insider working at a brokerage firm explained.

According to the Korea Financial Investment Association, brokerage firms can restrict margin trading or lower the credit limit in the case of an event that might severely affect the company’s business.

Exchange traded fund (ETF) investors will take a hit as well, since ETFs with Osstem Implant may also experience a downfall.

Osstem Implant stocks take up 7.19 percent of Mirae Asset Global Investments’ Tiger Healthcare Equip ETF as of Wednesday, 3.88 percent of the Kosdaq 150 Biotech ETF, with the total amount of investments reaching up to some 20.2 billion won.

Hana Bank announced Wednesday that they are halting sales of ETFs with Osstem Implant, followed by other brokerage firms including Mirae Asset Securities and Daishin Securities.

Some minority stockholders are reported to be considering filing a class-action lawsuit against Osstem Implant.

Law firm Hannuri Law put up a banner on its website Jan. 6, inviting the minority stockholders of Osstem Implant to participate in the class-action lawsuit against the company.

“Even if Osstem Implant retrieves the embezzled money, the damage done to the minority stockholders can’t easily be undone,” said Hannuri Law, arguing that the stockholders can lodge a compensation claim or file a shareholders derivative suit against the company.