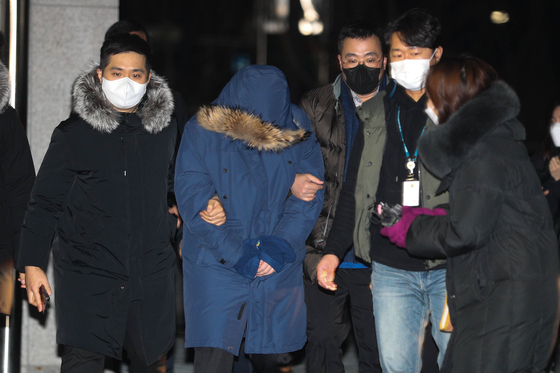 An employee of Osstem Implant, only identified by the surname Lee, is taken to Gangseo Police Precinct in Seoul in the early hours of Thursday for questioning about alleged embezzlement from his company. [NEWS1]


Police on Saturday obtained an arrest warrant for an employee of dental implant manufacturer Osstem Implant at the center of Korea's largest case of embezzlement.

The Seoul Southern District Court granted police an arrest warrant for the suspect, a 45-year-old identified by the surname Lee, on grounds that he posed a flight risk and could destroy evidence if he was not taken into custody.

The warrant was issued after a warrant review that took place at 2 p.m. without Lee present. He declined to attend.

Lee was taken into custody on Wednesday night on suspicion of embezzling 188 billion won ($158 million) from his company while working as the manager of its finance department.

The alleged embezzlement took place from March to October through eight transfers from the company’s coffers to his personal bank account.

Two of the transfers were of 5 billion won, and for reasons unknown, Lee returned the funds to the company’s account.

He went into hiding on Dec. 30, one day before his employer reported him. The amount embezzled is close to the value of the company in terms of shareholder equity, according to a regulatory filing submitted by the company.

He was apprehended not in the apartment where he lived, but in a fourth-floor unit in the same building that was recently vacated by another tenant.

According to police, Lee used the embezzled funds to purchase stock in Dongjin Semichem, a manufacturer of chemicals used in semiconductors and electronics displays, as well as 851 1-kilogram (2.2-pound) gold bars from the Korea Gold Exchange from Dec. 18 to 28.

Police recovered over 497 gold bars that Lee stashed in his home. A police official who asked not to be named told the JoongAng Ilbo that investigators are searching for the missing 354 kilograms of gold.

Investigators also believe that Lee lost a significant amount of the embezzled funds on stocks that depreciated before he withdrew 143 billion won in company funds – the final and largest amount he took out of the company’s account – in October.

Lee used almost all of the funds from the October transfer to buy 3.91 million shares in Dongjin Semichem, or 7.62 percent of the company.

Lee then sold 3.36 million Dongjin Semichem stocks, collectively worth 111 billion won, over eight transactions in November and December, before he visited the Paju branch of the Korea Gold Exchange to buy 68 billion won in gold bars.

Police suspect that Lee lost 30 billion won in the process of buying and later selling the Dongjin Semichem shares.

While Osstem insists that Lee acted alone, police are working to find if he had accomplices as they suspect the funds were too much for a single employee to steal without help.

Suspicions also abound over why Lee personally visited the gold exchange to buy easily traceable gold bars, and why he did not try to evade police by hiding somewhere other than the same building where he lived.

Police investigators were able track Lee’s movements by analyzing surveillance cameras near the exchange where he purchased the ingots.