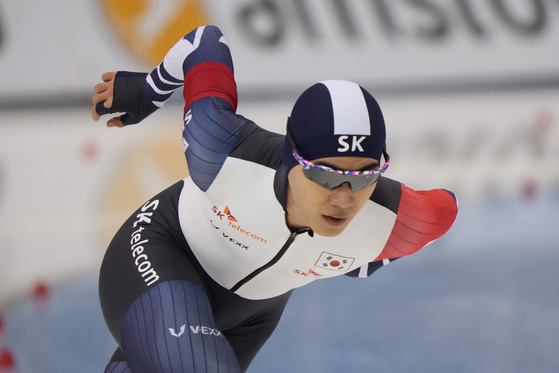 Kim Min-seok competes in the men's 1,000 meters at the ISU World World Cup in Salt Lake City on Dec. 5. [EPA/YONHAP]


PyeongChang Olympics medalist speed skater Kim Min-seok is looking to repeat his debut success as he returns to the ice at the upcoming 2022 Beijing Winter Games.

Kim, who won bronze in the men's 1500-meter competition in 2018, will be the first Korean speed skater to race in Beijing.

"I want to do well in the my first match and give strength to my teammates,” Kim told the JoongAng Ilbo.

Kim, who wore the Taegeuk mark for the first time at age 16, won the men's 1,500-meter bronze medal in his very first Olympic outing four years ago.

Korea has always been a speed skating powerhouse, but usually is stronger in the shorter and longer races. Kim Min-seok’s 2018 bronze medal made him the first Asian athlete to have medaled in the men’s 1500-meter race.

Going into Beijing, Kim still looks strong. He won his first men's 1500-meter gold medal in an ISU World Cup in Poland earlier this season, immediately following that up with a silver medal at the very next event in Norway.

Though he finished his third World Cup in 12th place and did not attend the fourth World Cup, he was able to finish seventh in the overall men’s 1500-meter World Cup rankings.

Kim’s success this season comes despite him sitting out the entire 2020-21 ISU World Cup process.

"I couldn't participate in the World Cup last season because of Covid-19,” said Kim. “I feel like competing in the World Cup after all this time helped me find back my form. Honestly, my form wasn’t the best after the quarantine, but that is what I need to be able to take care of as an athlete. I want to prepare well for the big stage for the remaining time.”

"I won two medals four years ago,” Kim said. “I'm more greedy this time. I'm optimistic but I don't feel burdened with medals. I want to race without regrets."

Alongside Kim, Kim Jun-ho and Cha Min-kyu will compete in the men’s 500-meter race. Cha will also be competing in the men’s 1000-meter final.