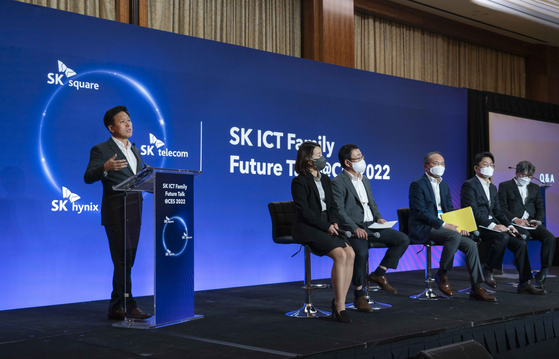 Park Jung-ho, Vice Chairman and CEO of SK Square and SK hynix, delivers a speech during an announcement in Las Vegas on Thursday. [SK TELECOM]


SK Telecom, SK hynix and SK Square will invest 1 trillion won ($833 million) this year in technologies such as advanced semiconductors, artificial intelligence, blockchain and the metaverse.

The three affiliates of SK Group will form a tech alliance, according to a plan announced last Thursday at the CES 2022 in Las Vegas. The three companies will create a 1 trillion won investment fund from outside investors to develop AI and semiconductors.

The plan came as each company searches for new businesses and with the hope of some synergy among the three.

To market the chips overseas, the SK group set up a company called Sapeon in the United States.

“By proactively responding to changes taking place in the areas of AI, metaverse and 5G, we will prepare ourselves for the next decade,” said Ryu Young-sang, CEO of SK Telecom, during the announcement at CES.

While the focus of SK Telecom will be processors for connected cars and data centers, SK hynix will be able to concentrate on its memory chip sales in the U.S.

The chipmaker plans to set up a branch and R&D center in the U.S., according to a statement, although the size of the investment and location have yet to be disclosed.

The heads of SK hynix and Qualcomm held a meeting at CES to discuss cooperation on chips for data center applications and high-speed memory for PCs.
“With competition intensifying in the global ICT market, cooperation is no longer a matter of choice but an absolute necessity," said Park Jung-ho, Vice Chairman and CEO of SK Square and SK hynix, in the statement.  “All ICT affiliate companies of SK will lead innovations by pursuing cooperation that goes beyond all national borders and industries.”

SK Square, an investment company, will lead investment in the areas of blockchain and the metaverse while creating a blockchain-backed system for SK Telecom’s metaverse platform Ifland.

It plans to use expertise from Korbit, a virtual asset exchange it recently invested in.
SK Square announced the purchase of 35 percent of Korbit for 90 billion won last year to become the exchange's second largest shareholder.