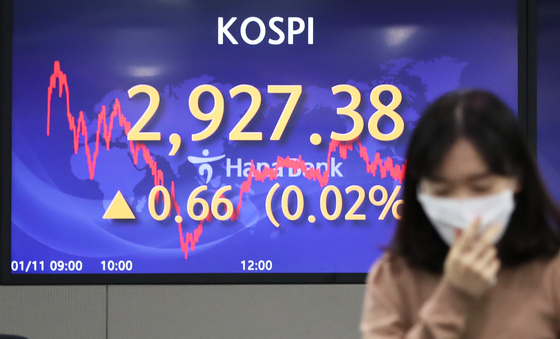 A screen in Hana Bank's trading room in central Seoul shows the Kospi closing at 2,927.38 points on Tuesday, up 0.66 points, or 0.02 percent, from the previous trading day. [NEWS1]

Stocks finished nearly unchanged Tuesday as investors await comments by the U.S. Federal Reserve chief at a Senate hearing. The won rose against the dollar.


But earlier gains were pared as investors took to the sidelines ahead of the Fed chairman's speech at the U.S. Senate hearing, slated for later in the day.


Tech, auto and chemical stocks rose, but their advances were offset by a decline in some banking stocks and shipbuilders.


The local currency closed at 1,194.7 won against the dollar, down 4.40 won from the previous session's close.