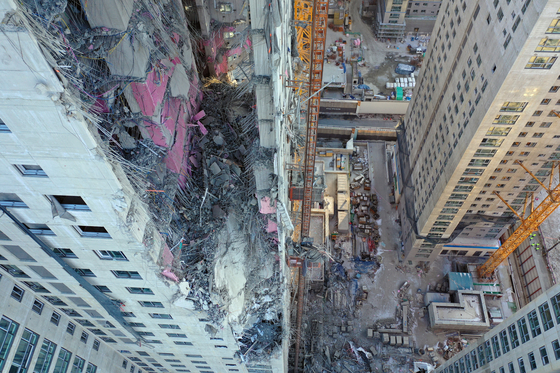 The side of a collapsed facade of an apartment in Gwangju being constructed by Hyundai Development Company on Wednesday. The collapse took place Tuesday afternoon, injuring at least one worker and leaving six missing. [YONHAP]

A facade of a high-rise apartment being built in Gwangju crumbled on Tuesday, leaving at least six workers missing and one injured.

The apartment was being built by Hyundai Development Company (HDC), the same company whose workers are currently on trial for a construction accident in the city seven months ago that killed nine and injured eight.

Construction workers were pouring concrete on the roof of the 39-story building in Hwajeong-dong when the facade, or the outer wall, from floors 23 to 38, crumbled. The first report of the accident was made to a local fire department at around 3:47 p.m. Tuesday.

Concrete chunks and debris hit some 20 cars below and at least four workers. Three were sitting in a makeshift construction office near the building and were trapped under the falling debris. They were rescued Tuesday and were reported to have sustained minor injuries.

Another worker was in the open when the debris hit him. He was hospitalized Tuesday.

A total of 394 workers, who work for 22 different subcontractors, were hired by HDC to work on the apartment complex, one of the Hyundai I-Park series, from March 2020. The complex was set to be completed next November.

A total of 388 workers, including the four rescued on the ground floor, were accounted for by Tuesday evening.

Of the six missing workers, four were believed to be trapped in the building, or under debris, according to the police.

“We have six missing workers, and we have confirmed that four of them were working on the site when the accident took place,” a police officer told the JoongAng Ilbo on Wednesday. “Of the other two, we couldn’t confirm through the companies or the relatives whether they were inside the building at the time.”

All of the six workers’ cellphone signals were detected within a 2-kilometer (1.6 miles) radius from the site as of Wednesday. None of them could be reached by phone.

The search and rescue operation for the missing workers was halted at 8 p.m. Tuesday and resumed Wednesday morning. For fear of further collapse of the building, the police and fire department relied on search dogs and drones.

There is a tower crane attached to the apartment that is also impeding the search, according to the police.

“If the crane falls, it could lead to further injuries,” said a police officer.

Some 200 shop owners, office workers and residents near the area have been evacuated, according to the police.

“I feel deeply responsible for the accident,” Yoo Byung-kyu, president of Hyundai Development Company, said during a press conference held near the site on Wednesday. “We apologize to the missing persons, their families, and the citizens of Gwangju who suffered damage due to the unfortunate accident that occurred at our construction site.”

Yoo added that the rescue of missing workers will be top priority and that the company will cooperate with the fire department and other authorities to try to find them. 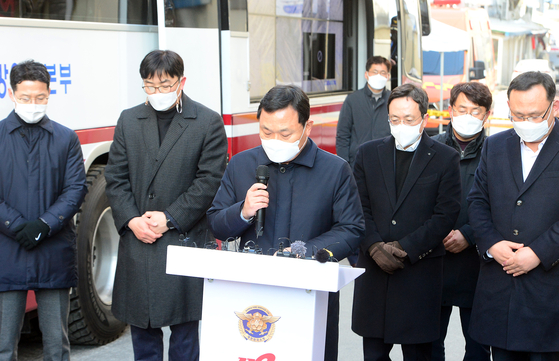 Yoo Byung-kyu, president of Hyundai Development Company, apologizes for the accident near the construction site in Gwangju on Wednesday. [JANG JEONG-PIL]

The Ministry of Land, Infrastructure and Transport created a committee on Wednesday to investigate the cause of the accident. The committee will report its findings in two months.

Some relatives of the missing workers spent the night in a makeshift tent set up near the site on Tuesday.

“[The authorities] told me that he was last said to have worked on the 31st floor,” said a relative of a missing worker. “If I could, I would go in and search for him. I can’t believe that I have to wait here, not knowing what has happened to him.”

Because construction work in Korea could involve dozens, if not hundreds, of subcontractors, the people held responsible for construction accidents have been usually site managers rather than CEOs.

Last January, the National Assembly passed a law specifying that CEOs and executives of construction companies can be held accountable for construction accidents. The law is to go into effect on Jan. 27.

The Gwangju city government on Wednesday ordered HDC to cease all of its construction work in the city.

“We apologize to Gwangju citizens for a repeat of an accident like this after only 217 days,” said Park Nam-eon, a Gwangju city official, during a press briefing near the construction site on Wednesday.