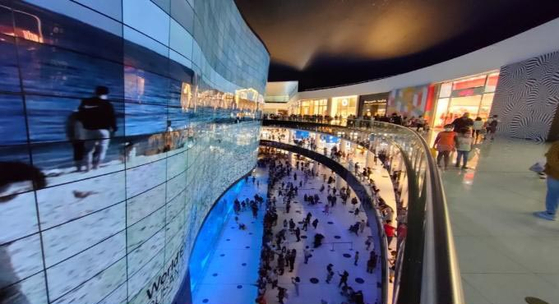 A promotional video on Korea’s bid to host the World Expo 2030 in the port city of Busan plays on the world's largest OLED screen installed at Dubai Mall in the United Arab Emirates (UAE) on Jan. 6. President Moon Jae-in will kick off a three-country, eight-day trip to the Middle East Saturday and is expected to attend an official ceremony for ″Day of Korea″ at the Expo 2020 in Dubai Sunday during a visit to the UAE. [BUSAN METROPOLITAN CITY]

President Moon Jae-in will embark on an eight-day trip to the Middle East on Saturday to engage in economic diplomacy with the United Arab Emirates (UAE), Saudi Arabia and Egypt.

The visit is expected to provide opportunities for Korean businesses to advance in the Middle Eastern market in hydrogen, future energy and defense, according to the Blue House, as the region also seeks for diversification from oil to other industries.

In a visit to the UAE Sunday, Moon will attend a business roundtable on cooperation in the hydrogen industry. He will meet with Sheikh Mohammed bin Rashid al-Maktoum, UAE's prime minister and ruler of Dubai, and discuss cooperation in hydrogen, infrastructure, climate change response and space.

Moon will also attend an official ceremony for "Day of Korea" at the Expo 2020 Dubai on the same day and work to promote Korea’s bid to host the international event in Busan in 2030, according to the official.

On Monday, Moon will hold a summit meeting with Abu Dhabi Crown Prince Mohammed bin Zayed Al-Nahyan on how to further develop bilateral ties on issues including climate change, defense, health care and science and technology.

He will also deliver a keynote address on carbon neutrality at the opening ceremony of the Abu Dhabi Sustainability Week.

In the second leg of the trip, Moon will visit Saudi Arabia, Korea’s largest trading partner in the Middle East, on Tuesday and Wednesday. He will hold talks with Saudi Arabian Crown Prince Mohammed bin Salman as the two countries mark the 60th anniversary of diplomatic ties this year. The two sides are expected to discuss energy and infrastructure, as well as health care, science and technology, hydrogen, intellectual property and education, and an hold in-depth discussion on how to expand the horizon in future fields, according to the Blue House.

This marks a Korean president’s first trip to Saudi Arabia in seven years. The crown prince made the first visit to Korea in 21 years by a Saudi heir to the throne in June 2019.

The Blue House official said, “Saudi Arabia is pursuing a national development strategy moving away from oil for industrial diversification and expects to strengthen cooperate with Korea in hydrogen, digital and other new industries.”

On Jan. 20 and 21, Moon, on the last leg of his Middle East tour, will make a state visit to Egypt, strategically positioned between Europe, Africa and Asia and a global logistics hub with the Suez Canal.

He will hold a summit with Egyptian President Abdel Fattah el-Sisi to discuss ways to further develop the comprehensive cooperative partnership between the two nations. They are expected to discuss expanding cooperation in future-oriented and sustainable fields such as eco-friendly mobility, maritime cooperation, digital governance and cultural heritage excavation and preservation.

Earlier this month, Korea was selected to participate in the El-Dabaa nuclear power plant project in Egypt, playing a role in the building of that country's first nuclear generator.

Im Jong-seok, special adviser for foreign affairs and security specializing in the UAE and Moon’s former chief of staff, is expected to accompany the president on this trip.

Moon will return to Korea on Jan. 22.