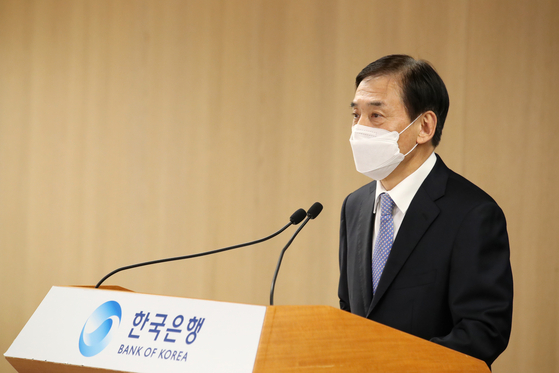 
The Bank of Korea raised rates by 0.25 percentage points to 1.25 percent on Friday.

They are now back at pre-pandemic levels.

Rates had been taken down to a record low of 0.5 percent as the economy suffered during the outbreak.

With inflation now high and possible bubbles in asset markets, the central bank has been warning of tighter monetary policy and has been ahead of most major economies in increasing rates.

Consumer prices rose 2.5 percent in 2021, the most in a decade, while home prices rose the fastest among major markets in the third quarter of last year.

The central bank said Friday that it made the move because the high vaccination rate has allowed for an economic recovery despite the arrival of variants.

It added that the 3 percent 2021 growth forecast from November has been maintained, but that consumer price inflation will run at about 3 percent for a "considerable time."

Though the rates have been increased, the current monetary policy "is still believed to be at a relaxed level considering current economic conditions, like growth and inflation," Gov. Lee Ju-yeol said during an online press event held Friday morning. Lee added that a rate increase to 1.5 percent would still not be seen as a monetary tightening.

Annual interest payment by households as a result of the increase will rise by 3.2 trillion won ($2.7 billion), according to the bank. Korea's outstanding household debt in the third quarter of last year was 1,845 trillion won. The debt is projected to break 1,900 trillion won in the first half.

The monetary policy board of the central bank began raising the base rate last year, with two increases in 2021. The last was in November.

Earlier this month, Lee said the central bank will "moderately adjust the easing of the monetary policy in accordance with economic improvement."

In a report released on Jan. 4, Na Seung-doo and Kim Do-hyun, analysts at SK Securities, forecast two rate increases this year, one in the first quarter and another in the third quarter.

The central bank's rise on Friday came as the U.S. Federal Reserve prepares to tighten monetary policy. Chairman Jerome Powell told Congress Tuesday that the Fed will get more aggressive with rates.

"If we see inflation persisting at high levels, longer than expected, if we have to raise interest rates more over time, then we will," Powell said during a Senate Banking Committee hearing.

Lee said Fed's decision could "increase the volatility of the domestic market in accordance with the changes of the Fed's monetary policy."