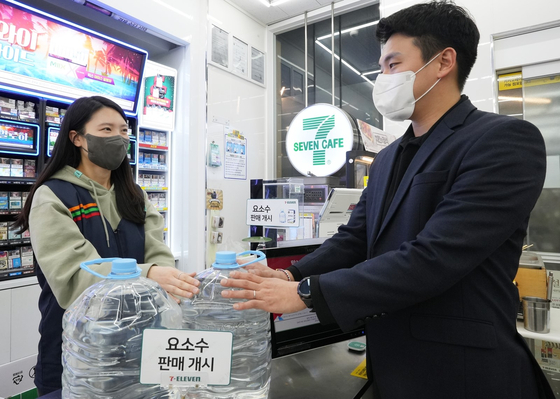 DEF is sold at a 7-Eleven convenience store [7-ELEVEN]


Korea's diesel exhaust fluid (DEF) crisis is over, with the vital engine fluid now selling at your nearest convenience store.

"There was a lot of requests for us to carry DEF at branches near industrial complexes," said Lee Dong-hak, a merchandiser at 7-Eleven. "Convenience stores are becoming an everyday lifestyle platform with their high accessibility and variety of products and services, and we will continue to carry products that fit the needs of customers."

Korea has struggled with a critical shortage of DEF since November after exports of urea, its main ingredient, were cut off from China. Without DEF, diesel truck and cars stop functioning. Government restrictions limiting purchases and only allowing gas stations to sell DEF were lifted at the beginning of the year as the supply situation eased.

The GS25 chain also started selling DEF in its stores. Starting Jan. 5, 8,000 of its branches started offering 10-liter bottles of DEF manufactured by Kumsung E&C, a Gyeonggi-based chemical maker. GS25 has sourced 10,000 bottles, but plans to soon offer the product at all 16,000 branches nationwide when its acquires more.

The Ministry of Economy and Finance held a meeting Thursday and announced the DEF crisis over.

“DEF is being produced at double the amount consumed per day during weekdays,” said Deputy Finance Minister Han Hoon.

There were 5,000 tons of DEF imported last November, the nadir of the crisis, which jumped 700 percent to 40,000 tons in December. The government expects some 36,000 tons to be brought in through January.

Hard work in the dark (KOR)