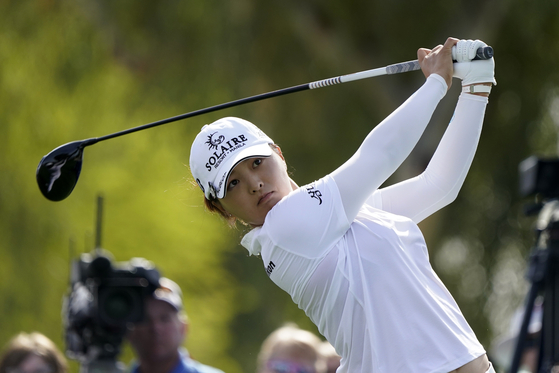 Ko Jin-young tees off on the 16th hole during the Chevron Championship in Rancho Mirage, California on March 31. [AP/YONHAP]


The LPGA Tour returns Thursday with the DIO Implant LA Open, where world No. 1 Ko Jin-young looks to overcome a string of near misses at the event to become the first Korean to win the Los Angeles tournament.

Now in its fourth year, the DIO Implant LA Open, formerly the Hugel-Air Premia LA Open, is one of the few tournaments on the tour to have never seen a Korean golfer in the winner's circle.

Ko has come the closest, finishing in the top five at every tournament to date: Tied for second in 2018, tied for fifth in 2019 and tied for third last year.

This year Ko joins a competitive field at the Wilshire Country Club in Los Angeles, with all three former winners of the tournament — Brooke Henderson, Minjee Lee and Moriya Jutanugarn — set to compete.

Among the other Korean contenders are Amy Yang, who holds the tournament record at 7-under, Hall of Famer Park In-bee, world No. 10 Kim Sei-young and rising star rookie Choi Hye-jin, who has already had three top 10 finishes in five tournaments this year.

Speaking ahead of the tournament, Ko reflected on her last outing, The Chevron Championship in late March. Ko saw one of her worst results in recent years at the tournament, finishing tied for 53rd.