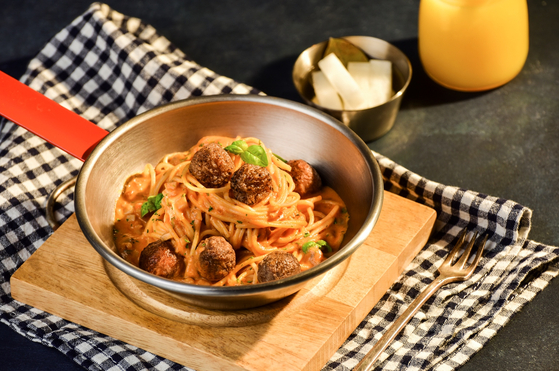 
Lab-grown meat is the next big thing in faux meats, and a number of small Korean companies are trying to get their hooves in the door.

There are just a few hitches. It is prohibited in Korea and costs far too much. It may also be less ethical than hoped.

Most commercially available meat substitutes are made from plant materials, such as beans, wheat or peas.

It is essentially grown in a lab.

In theory, lab-grown meat is better for the environment, as growing meat creates less pollution than raising animals. It is also potentially healthier. Cultured in a lab, it is less likely to be infected with animal-borne diseases.

In reality, many questions remain, so many that the product is yet to be marketed commercially.

Producing lab-grown meat involves fetal bovine serum (FBS), which is used as a growth supplement for cultivation. As the extraction of FBS is done during slaughtering, ethical concerns have been raised.

Cost is another issue.

"We found that Saccs contains a higher amount of amino acid, minerals and antioxidants. It also does not contain any contamination," said Kang Do-hyung, chief of the Kiost's Jeju Research Institute.

Daesang Corporation has signed a strategic partnership with Xcell Therapeutics, a domestic start-up company that has developed serum-free media. The company also partnered with Space F last August, and the companies aim to produce a cultivated meat product by 2025.

Growing interest and investment in cultured meat is a global phenomenon.

Leonardo DiCaprio, the American actor, became an investor in and an advisor to Mosa Meat last year, a start-up company that claims to have cultivated cells without the use of serum.

The Ministry of Agriculture, Food and Rural Affairs forecasts the global meat substitute market will grow by 6.2 percent every year until 2023.

Cultivated meat is not considered consumable in Korea yet under the Livestock Product Sanitary Control Act.

"We need to seek approvals from authorities to produce cultured meat, but there are no proper laws established for cultured meat both domestically and internationally," said a CEO of a cultured meat start-up.

"The cultured meat industry is too small and unstable for big corporations to invest yet, but the market is too big for start-up companies to pioneer. Cooperation of companies is crucial at this moment."