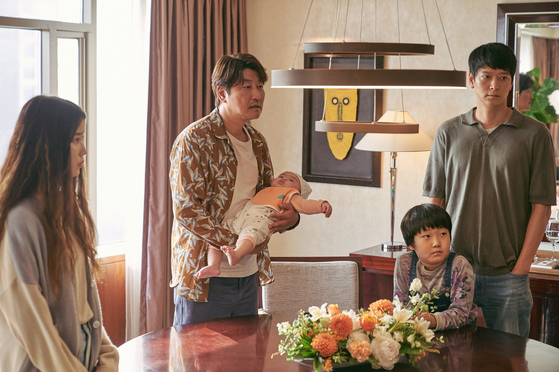 In “Broker” (2022), Song Kang-ho portrays Sang-hyun, a man who calls himself a broker of goodwill. Sang-hyun, Dong-soo (portrayed by Gang Dong-won) and a single mother named So-young (portrayed by Lee Ji-eun) embark on a journey to find a new home for So-young’s baby, Woo-sung. [CJ ENM]


It was seventh time lucky for Song Kang-ho who was finally recognized at the Cannes International Film Festival on Saturday, winning Best Actor for his performance in “Broker.”

“Broker” is Japanese director Hirokazu Kore-eda’s first Korean-language film and it was invited to compete for the prestigious Palme d’Or. Although it failed to win the top honor, it did land Song a much-deserved trophy.

“Broker” tells the story of group of people who embark on a journey to find a new family for a baby who was found in a baby box, where babies can be anonymously dropped off to be cared for by others. Song portrays Sang-hyun, a man who calls himself a broker of goodwill. 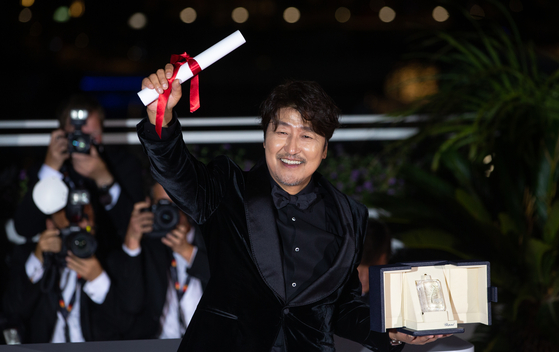 Song poses at the Cannes Film Festival after winning the Best Actor Award for his performance in "Broker." [NEWS1]


On Saturday night, Song became the first Korean actor in 15 years to receive a trophy for his acting since Jeon Do-yeon won the Best Actress Award for her role in director Lee Chang-dong’s 2007 film “Secret Sunshine.”

Song is only the fourth Asian to win Best Actor at the Cannes festival. He follows Ge You for his role in the Chinese film “Lifetimes” in 1994, Tony Leung Chiu-wai for his role in the Hong Kong movie “In The Mood For Love” in 2000 and Yuya Yagira for the Japanese film “Nobody Knows” in 2004. 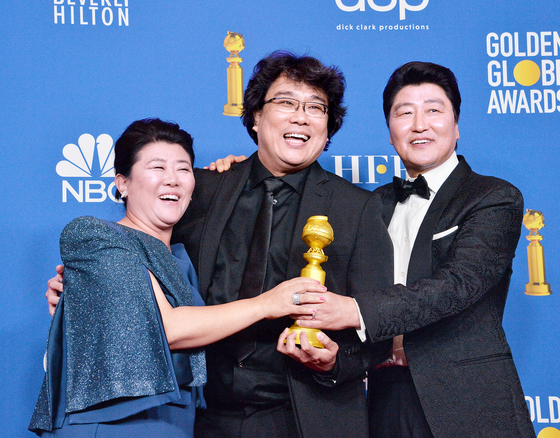 This year was Song’s seventh visit to the prestigious festival, and the fourth time that a film that he starred in competed for the Palme d’Or.

Song first visited Cannes as the star of director Bong Joon-ho’s 2006 film “The Host,” which was screened in the Directors’ Fortnight section of the festival. The following year, he attended thanks to his role in “Secret Sunshine" and in 2009, was invited after starring in director Park Chan-wook’s “Thirst,” which won the Jury Prize. 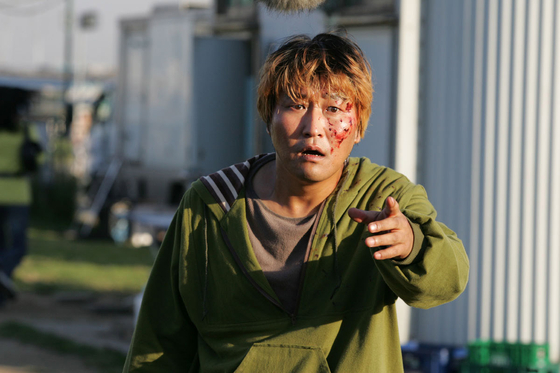 In “The Host,” Song plays Gang-du, a slow-witted vendor who takes care of his father’s shop near the Han River. His life changes when a monster created from environmental pollution kidnaps his daughter Hyun-seo (portrayed by Go Ah-sung). [SHOWBOX]


Lee also had roles in “The Good, The Bad, The Weird” (2008) by director Kim Jee-woon and “Emergency Declaration” (2022) by director Han Jae-rim, which were both screened at Cannes in the category of films out of competition.

Last year, Song became a member of the Cannes’ jury, becoming only the second Korean actor to do so after Jeon Do-yeon in 2014.

Cannes is not the only international film festival to recognize Song. In 2019, he made history by becoming the first Asian actor to win the Excellence Award at the 72nd Locarno International Film Festival. The award pays tribute to film personalities whose efforts and talents have enriched cinema. Some notable winners of the award include Ethan Hawke, Mathieu Kassovitz, Edward Norton, John Malkovich, Juliette Binoche and Isabelle Huppert.

“Song might not be a household name for audiences in the West, but his face is familiar around the world,” Lili Hinstin, artistic director of the Lorcarno Film Festival commented after Song was awarded the excellence prize. “A many-faceted actor, he is a peerless interpreter of the variety and intensity of emotions generated by Korean cinema, at ease in anything from drama to hard-boiled thriller, his face and body indelibly associated with the films of directors such as Bong Joon-ho, Park Chan-wook and Kim Jee-woon; who if not Song Kang-ho can embody in a single performance all the excellence of Korean filmmaking over the past twenty years?”

Song was not the only Korean to be honored at Cannes over the weekend.

“If Song and I had come to Cannes by working on the same film, it would have been difficult for us to both receive a prize,” Park told Korean reporters. “The festival does not give both awards to one film. I feel like we were both able to receive a prize because we came separately.”

“I have worked with Park many times, and [his winning] is especially meaningful for me because he received the Jury Prize with ‘Thirst,’” Song said. “I don’t think that I will be able to forget the moment when Park came running up to me as my name was called. I was so touched.”

When reporters asked Park if he had any plans to work with Song in the future, Park joked with Song, “just don’t reject my offer. All will be done in time.”

Song remained humble when praised during the press conference after the closing ceremony on Saturday. “I don’t think acting holds any meaning if it is done for the purpose of achieving an award. Actors have to be free and they need to be continuously liberated from such things. It is extremely crucial that they do so,” the actor said. 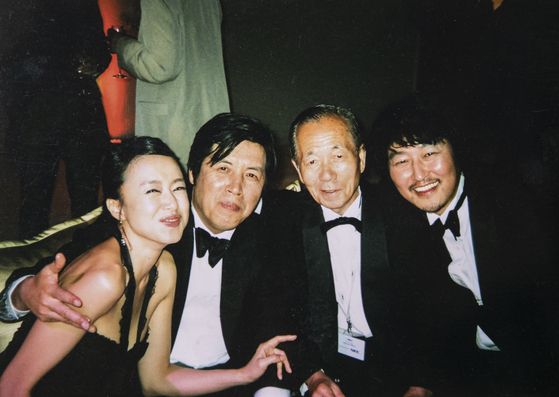 
The fact that Song is once again being recognized for his portrayal of a seemingly ordinary character that lives a somewhat mundane life, speaks to his acting prowess.

A 2019 article by Forbes titled “Parasite Star Song Kang-ho Has No Hollywood Plans,” cited how Song had turned down chances to star in big-budget Hollywood productions despite the international recognition he gained for his performance in “Parasite.”

“I would like to pass on that opportunity to other actors,” he was quoted as saying in the article. “I think in such films I would disappear, so I will instead continue to use Korean films such as ‘Parasite’ to express myself.”

Song did not attend acting school and instead has honed his skills over the last 26 years by appearing in some 40 films.

He debuted in 1991 through a theatrical play called “A Little Monk” and made his silver screen debut in director Hong Sang-soo’s “The Day A Pig Fell Into The Well” (1996). Lee Chang-dong, who'd seen Song perform on the theater stage, offered him a small role in his debut feature film “Green Fish” (1996). Director Song Neung-han, who saw his acting in “Green Fish,” offered him a role as one of the gangsters in his film “No. 3” (1997) which earned the actor some public attention. Thus began his decades-long career which has seen him work with legendary directors across a variety of genres. 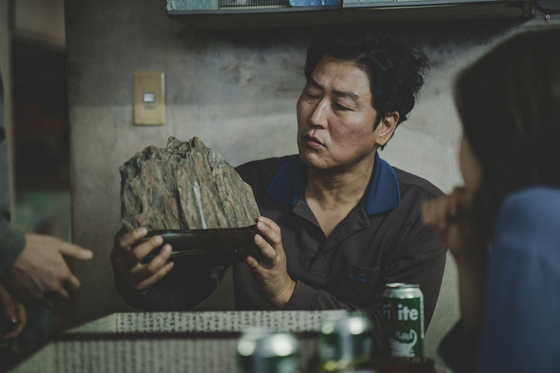 Song portrays Ki-taek in “Parasite” (2019), the father of the Kim family who live in a small semi-basement apartment in Seoul. He and the rest of the family end up working for the wealthy Park family. [CJ ENM]


At the local press event for “Broker” earlier this month, Hirokazu Kore-eda who wrote and directed the film said he had Song in mind from the very beginning. Before the film went into production, Kore-eda had a meal with Bong and Song, during which Bong told Kore-eda not to worry about directing his first Korean-language film because “you can always rely on Song.”

“I received a lot of advice from Bong during our meal together,” Kore-eda said. “Especially regarding my worries about creating a film from a foreign country. Bong told me that when the production begins, I can just count on Song because his presence is like a sun and his presence will light up the set and everything will go well.”

As well as a shelf full of awards, Song has also starred in four films which garnered over 10 million in ticket sales — the number deemed the milestone of a film's commercial success in Korea. The four films are “The Host,” “The Attorney” (2013), “A Taxi Driver” (2017) and “Parasite.” 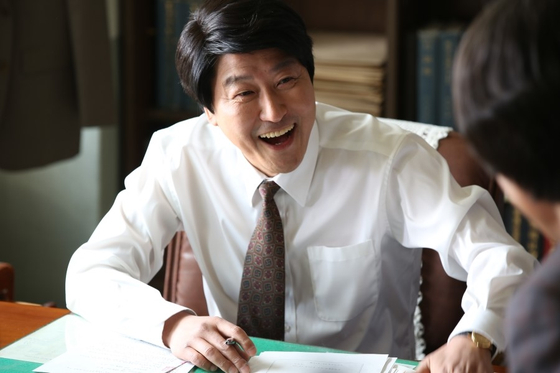 In “The Attorney,” Song plays a lawyer named Woo-suk, a character based on former president Roh Moo-hyun. [NEW]


American film website IndieWire selected named Song on its list of “The 15 Best Film Performances By Actors in 2019” for “Parasite.” He was the sole Asian actor to be listed.

The following year, the actor made it on the New York Time's list of “The 25 Greatest Actors of the 21st Century” along with actor Kim Min-hee.

“He has the ability to bring life and rawness to every moment,” Bong said in an interview with the New York Times about Song. “Even if a scene involves difficult dialogue or highly technical camerawork, he will find a way to make it seamless and spontaneous. Each take will be different, and the unwieldiest dialogue will seem like improvisation.

“His uniqueness as a protagonist comes from his ordinariness and mundaneness. Especially to the Korean audience, Song projects the quality of the typical Korean working man, a neighbor or friend you might encounter in your neighborhood [...] He starts from the ordinary and elevates it into a singular and inimitable voice. I believe that’s what makes Song Kang-ho and the characters he inhabits genuinely special.”

Since “Parasite,” Korean content and actors have been enjoying attention on the global stage. Youn Yuh-jung became the first Korean actor to win the Best Supporting Actress at the Academy Awards in 2021 for her role in “Minari” (2020) while Lee Jung-jae and Hoyeon from Netflix series “Squid Game” (2021) became the first Korean actors to respectively win Outstanding Performance by a Male Actor and Outstanding Performance by a Female Actor at the Screen Actors Guild (SAG) Awards in February.

Song's name will also be marked in the history books as the first person to win an acting award for a Korean-language film by a foreign director at one of the “big three” — Venice, Cannes and Berlin.

This information was confirmed by SUBLIME on May 31, 2022.