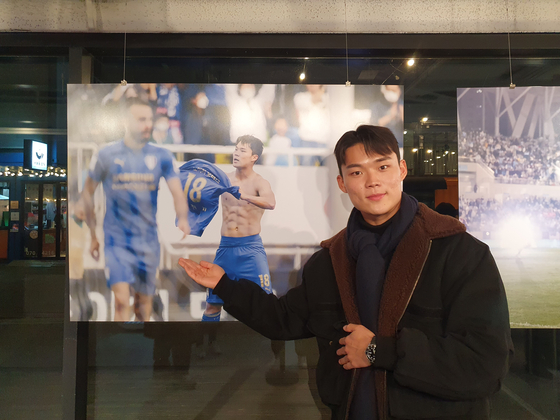 Oh Hyeon-gu poses at a fan signing event held at the Under Stand Avenue on Dec. 30, 2022 in Seongdong-gu, Eastern Seoul. [JOONGANG DAILY]


Celtic have reportedly already agreed personal terms with Korean forward Oh Hyeon-gyu of the Suwon Samsung Bluewings and will finalize the deal in the next few days.

According to Sky Sports, Celtic are close to closing a deal worth £2.5 million ($3 million) with the Bluewings, with Korean reports adding that both Oh and manager Lee Byung-keun are in favor of the move, with the club expected to fall in line in the next few days.

Celtic made an initial offer for Cho in December last year, but were seemingly rebuffed by the Korean club. Oh told reporters at the time that he was in favor of the move, but the Bluewings insisted the club still wanted to keep him for the coming K League season.

That position appears to have changed however, with Celtic reportedly offering a more generous deal and Lee backing the move. Celtic manager Ange Postecoglou told reporters over the weekend that he expects some new signings are on the way.

Oh is a particularly attractive option for international clubs because he finished his military service early, completing two years with the Sangmu military club last season.

Celtic’s desire to sign Oh comes as the club is on the verge of losing its striker Giorgos Giakouamkis, who looks set to move to J1 League’s Urawa Red Diamonds.

Oh could reinforce Celtic’s attack in the absence of the Greek striker as he scored 14 goals in 39 appearances across all competitions in the 2022 K League season.

He was called up to the senior Korean squad for the first time on Nov. 11, playing 18 minutes of a friendly against Iceland, and landing on the reserves list for the 2022 Qatar World Cup.

Oh was included on the reserves list in the event that Son Heung-min could not play in the World Cup due to his face injury. The 21-year-old did not play a single minute in the tournament as the Korean captain played all four matches.

In an interview with Yonhap last December, Oh revealed his desire to play better: “I want to wear a number in the next World Cup, and I think not having played in this World Cup motivates me.”

The Scottish club initially also made an offer for Jeonbuk Hyundai Motors striker Cho Gue-sung, who came to prominence at the 2022 Qatar World Cup, but the deal never progressed.