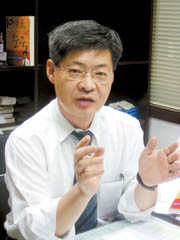 The Chinese stock market isn’t a complete barometer of the Chinese economy in and of itself ― not yet, anyway.
In a telephone interview Wednesday with the JoonAng Daily, Park Han-jin, assistant manager at the Korea Trade Investment Promotion Agency’s Shanghai Trade Center, said the stock market in China will experience more rapid ups and downs. He said not to focus on daily changes, but rather anticipate a rally in the long term.
“Both positive and negative factors exist, but summed up, stock prices will definitely rise,” said Mr. Park.
Stock prices at the Shanghai Stock Exchange plummeted more than 8 percent Tuesday, the biggest fall in almost 10 years, which influenced all major global stock markets to dive, including the New York Stock Exchange.
“I got a phone call from my Chinese friend telling me that he lost quite an amount on Tuesday. There were no media reports telling stories about individuals who lost money. They mainly analyzed the causes and prospects.”
Mr. Park did not expect to see negative news since the Chinese government controls the media.
Liquid investments in China could be redirected to Korea, but the chances are low, said the manager.
“Overseas investment to China is not only in stocks. While real estate and the stock markets are in confusion, funds are flowing into domestic industries,” he said.
In the past few years, the Chinese government has been implementing numerous retrenchment policies, increasing interest rates and cash reserve ratios. Its people, however, are not being affected by the policies directly; rather, they are worried about the revaluation of the Chinese yuan, which would mean lower profit for exporters, and higher costs for manufacturers.
Demand in China is not enough for the producing power of its industry, said Mr. Park. People are highly interested in saving and investing. Since very few means of investment are accessible in China, money tends to flow back and forth between the stock market and real estate.
Retrenchment policy means decreasing the money flow. China, however, has more options to retrench. Because of the lack of transparent regulations, the government can add a new law virtually anytime to regulate industries, said Mr. Park.
The manager expects China to launch more retrenchment measures.
“Three issues have to be addressed for the government to stop retrenchment policies: the excessive production system has to be controlled; more domestic consumption is needed; and money flowing between the stock market and real estate needs to have more investment options,” he said.
The retrenchment policy is affecting Korean companies in China. Most of the Korean companies are using China as a place for their factories, but in the long term, China should be considered as a market, not just a factory, said Mr. Park. Current policies are focused on manufacturing, but the domestic market could be a “blue ocean,” or a market without strong rivals or regulations. Mr. Park, an expert on the Chinese economy, had predicted the Chinese market’s drop.