A dedicated follower of fashion

A dedicated follower of fashion 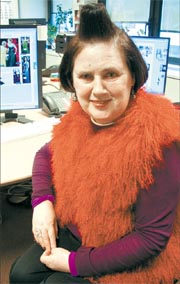 Suzy Menkes, the fashion editor of the International Herald Tribune at the newspaper’s headquarters in Neuilly-sur-Seine, Paris. By Ines Cho

PARIS ―“This one woman held up the entire Michael Kors show,” said the Korean fashion photographer K.T. Kim, recalling how he stood mesmerized at the entrance to a top New York fashion show in February 2004 as Suzy Menkes, the fashion editor of the International Herald Tribune, arrived late for the event.
Menkes, who is usually seated next to the likes of Nicole Kidman and Anna Wintour, has become increasingly well known in Korea. Fashion industry professionals here affectionally call Menkes “the woman in red with the banana hair,” a reference to the eccentric hair style she prefers.
Her conversation is casually laced with statements like “I was at the first Giorgio Armani collection, when nobody had ever heard of this young man.”
The British-born editor travels almost constantly from Paris to New York to Tokyo to Milan and to the newly emerging fashion capitals of the world.
She sees some 600 fashion shows and events per year and her reporting ― unbiased and unsentimental ― has given the Paris-based daily a place in fashion’s hall of fame, along with magazines like “Vogue.”
Menkes has won many honors, including the Order of the British Empire for her services to journalism and, in June 2005, she was named a chevalier of the Legion of Honor by President Jacques Chirac of France.
The IHT-JoongAng Daily recently caught up with Menkes at the IHT headquarters in Neuilly-sur-Seine, west of Paris:

Q. Tell us about the wedding you’ve recently been to in India.
A.I went to the wedding of Elizabeth Hurley, the British actress and model, and Arun Nayar, who is half Indian. It was the most spectacular celebrity wedding I have ever attended. We arrived in Jodhpur, a very old Indian city. We stayed in the palace, which is now a luxury hotel and it was fantastic. It was very English but very Indian, because all the men played cricket on the lawn and all the women had henna paintings on their hands and feet because that’s traditional for a bride. We had dancing and a feast and then we went to the desert and spent a night in a tent.

Tell us about the relationship between the International Herald Tribune and fashion.
Paris in the 1920s was the center of the fashion world, even more so than now. So, at that time, the IHT became a newspaper which dealt with fashion, society and all the grand parties and goings on in Paris.

What are the latest fashion trends?
I’ve seen extraordinary things that look like something from the Space Age. I would say anything that shines is the heart of fashion.
Now that MySpace is the hottest thing on the Internet, “my space” is also the hottest thing when it comes to clothes. It has become popular to make sure there’s space between the body and the garment. Stella McCartney does a big sweater, like something you might borrow from a boyfriend, or Raf Simon has a triangular coat that sways from the body.

How do designers take your criticism?
There are times when you’ve got to say to a friend, “this wasn’t your best performance.” I wouldn’t write a horrible criticism of a very young designer who’s trying to build up their career ― criticism is for somebody who may be a little too satisfied with himself and hasn’t produced anything new.
Karl Lagerfeld [head designer at Chanel] takes criticism so well. When I say, “The Chanel show is not as strong as last season,” he always says the same thing, “I think you’re so right. I’m going to do better next time.” That’s very smart because, in the end, they know whether they’ve done the best show or not, and I’m the first person to tell them. When John Galliano did a Dior show in Japan last year based around Madame Butterfly, I said what a wonderful show it was. So criticism can go both ways ― it can be good or bad.

How do you handle your extremely tight schedule?
I don’t love travel so much, but I love being all around the world. You get so many ideas when you travel. Next week, there is a fashion week in India and a fashion week in Moscow. How can I cut myself in half? That’s difficult!

What about travel plans for Asia?
Usually I come to Asia in April or May. This year I am coming in the fall. I have to tell you that the future belongs to Asia. I feel that the 20th century belonged to America. Now Asia is getting so strong, especially in fashion, so I couldn’t survive, as a fashion editor, without going there.

There are Korean designers ― Y&Kei, Woo Young-mi and Jihaye to name a few ― who are active in international collections. Do you have any comments on them?
I think all of these designers have made a mark in Europe. All of them are very interesting with fabrics, with finishes and with details. I think that’s very interesting because it’s the way fashion is moving.

What is your advice to new designers on how to become part of the international collections?
The most important thing in any of the arts is to be yourself. Not to try to be the new John Galliano or the new Calvin Klein. It’s to be yourself ― to bring something new and fresh that comes from inside you.

What is the fashion market like in Moscow where you will be hosting the Luxury Unlimited conference in November?
Moscow has become the hot spot for luxury since the Russian people rediscovered their taste for rich, elegant clothes and jewellery. Although suppressed during the communist years, Russians have always had a sensual feel for deep luxury and glamour. Today, they are not only responding to the lure of famous international brands such as Dior and Gucci, but they are also developing their own. They are also restoring their magnificent buildings including the department stores, like TsUM, and building superb shopping malls outside the city. So Russia is a good destination for the IHT luxury conference.

It is said that you’re the moneymaker of the International Herald Tribune. Let’s suppose you leave the paper, what will happen to the company?
It’s always a mistake for journalists to think that they are more important than the newspaper. The Herald Tribune will go on without me. There have been a series of fashion editors. There was an editor before me named Hebe Dorsey, who was known across the world. Sadly, she’s no longer living but she was a wonderful fashion editor. You know we each have our place.

You’re also an author of many books about the British royal family, such as “The Windsor Style,” “The Royal Jewels” and “Queen and Country.”
It really comes from my love for jewels. When I realized that the Queen of England has the biggest collection of jewels in the world and nobody had ever written about it, I thought, “Ah, there’s book I must write.” Since I wrote that book, tiaras have become very fashionable. All the rock stars get married wearing tiaras. So I’d like to think that maybe the trend came from the Queen of England and my book.

You’ve led a glamorous, luxurious and fun life. Have there been any depressing times for you?
I don’t believe in concentrating on the down times of my life, you know, sitting on the runway in an airplane for 2-and-half hours waiting for the plane to take off. We all have those experiences. Because I see so much of what happens in the lives of celebrities, I know that in every appearance and every movie they do, there’s a lot of hanging around and there’s a lot of difficulty with all the repetitions. But, it’s also great if you have a great life and if you are Kate Blanchett.

Do you have any hobbies that you enjoy?
One of my great hobbies is my family life. I have three sons and I love spending time with all of them. I like traveling of course for fun, not just for work. I like reading a lot and like to play tennis. I like listening to music. Fashion is wonderful part of your life, but it’s only part of it.

Any plans for independent projects?
I’m not writing a book at the moment but everybody says I should, because I famously use disposable cameras, you know the tiny ones that go “click click.” Do you know why I use them? Because the moment celebrities and their bodyguards see you have a digital camera or a telephone, they think “Oh my god, she’s a journalist! It’s going to be sent around the world, it’s going to be in her paper!” When you have a camera that has a Mickey Mouse or something in front of it, they give you such a fun smile, and you get the best pictures. Maybe those photos will make my next book.