Across the language barrier and back

Across the language barrier and back 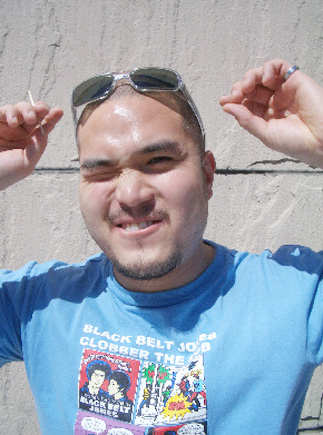 Robert Joe, a 29-year-old Korean- American, has had his share of linguistic confusion.
Born in New York, the Texas-raised broadcaster’s first language was Korean. “I was in ESL in kindergarten in the United States. Then I forgot all the Korean after that to ... what’s that word ...” he said, dramatically scratching his chin, “assimilate. I had to learn Korean again when I came back.” He is now fluent in both languages.
Like the majority of English-speaking foreigners who come to Korea, when Joe arrived in 2002 he started out in the English-teaching industry. He was less than impressed.
“It’s a stupid system,” he said. “You’ve got a whole bunch of people who don’t want to be learning English being taught by people who don’t want to teach English in a country that’s really resentful about English.”
He soon began looking for “any job that wasn’t teaching,” and ended up in broadcasting.
“I get paid for sub-standard talent,” he joked, “because demand for English is so high.”
Joe is now host of a TV and radio show on the Arirang network, but still has issues with the trappings of the language that provides his paycheck.
“I feel uncomfortable when people want to know me for English,” he said. “I want people to like me because I’m loaded and handsome.”
Even though he has avoided teaching, he takes a self-deprecating view of his broadcasting success.
“After being here for five years, I fear that I’ve become that guy that had nothing to do at home, then comes here and ends up not being able to go back,” he said.
“I’m the broadcast version of English teachers,” he said with a laugh.