Fair provides tips for foreigners on living in Korea

Fair provides tips for foreigners on living in Korea 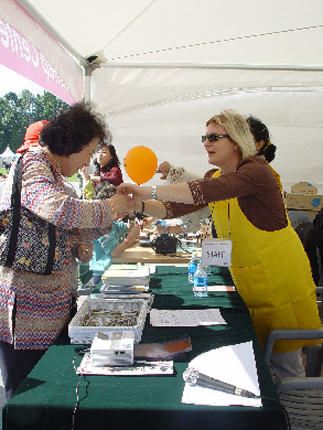 Renate Symes, right, a German volunteer at the Seoul Help Center for Foreigners, helps a visitor at the Information Fair in Seoul City Hall plaza Sunday. By Moon Gwang-lip

Foreigners flocked to Seoul City Hall Sunday for an information fair that also featured dancing on stage and a flea market across the street.
Tents offered all kinds of information for foreigners, from housing to health.
Korean b-boy dancers and other entertainers kept the crowd awake as they strolled by the white tents or took a break on the green grass in front of City Hall on a lazy autumn afternoon highlighted by lovely fall weather.
Now in its third year, the information fair is an annual event designed to provide useful information for foreigners living in Seoul.
This year there were more than 3,000 participants, approximately a third of them being expatriates, according to Yoo Jin-young, an official of the Seoul metropolitan government, which sponsors the annual fair.
That was the best turnout since the inception of the event in 2004, she said.
Along with the information tents a small flea market was held in front of the Deoksu Palace entrance.
For the fair, 50 groups, mostly from the expatriate community, came out to let other expats know about their activities.
The groups ranged from the Royal Asiatic Society, the oldest expatriate group in Korea, to SIWA, the Seoul International Women’s Association, the nation’s largest international women’s group.
Steve Kuiack was on hand to promote “The Groove,” a monthly magazine he publishes for expatriates living in Seoul.
He said the fair has been serving its purpose well.
“Basically, when I first came to Korea, there wasn’t really too much information for foreigners,” said Kuiack, who arrived in 2000 from Ontario, Canada.
“But over the years the Seoul government and the Korean government have been making some effort to have more information for foreigners.
“So I have been pleased to participate in this event because our magazine also provides good information for foreigners.”
Also on hand was GOAL, or Global Overseas Adoptees Link.
Daewon Wenger, an offical with GOAL, attended the fair and said the Korean government should increase support of single mothers and alter the perception of Korea being a “child-exporting country.”
“I do believe Korea is a developed country, and it’s a good thing for the government to support domestic adoption,” said Wenger, 40, an adoptee to Switzerland.
“But I also believe there should be other programs that support single mothers.”
“It doesn’t matter if it’s domestic or international adoption, but single mothers are giving up their children. They should be allowed to keep their children, and society should help raise them,” he said.
The Seoul Youth Center for Cultural Exchange encouraged visitors to paint white sneakers piled next to their tent. The shoes were painted in colors and patterns representing peace and love.
The concept is called Shoes of Hope, a campaign designed to donate sneakers to African children, according to Jun Sea-hyun, an official of the youth center.
Visitors included Michelle Milligan, 24, of Canada.
“My understanding is that some places in Uganda are very poverty- stricken, and so a good pair of shoes will be much appreciated,” Milligan said.
“So I am spending time thinking about how a child likes these shoes and how I might make them happy. Hopefully, maybe one day I will go there and maybe see the child wearing these shoes I painted ― you never know.”
Josephine Kenyon-Blair, an English teacher from Britain, visited the fair for the first time and found it very helpful.
“It’s a good opportunity to find out different helpful tips for living in Korea,” she said. “It’s a great help for me.”