Screening Korean film for the world

Screening Korean film for the world 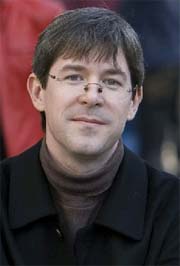 Korea’s attempts to expand its cultural influence outside its borders often meet language barriers ― the painful reality being that in today’s world, with a few exceptions, English is a necessity for global appeal.
But this difficulty presents a blue ocean of possibility for people wishing to serve as conduits between Korea and the world.
One such link is American Darcy Paquet, who is helping to bring Korean film to international attention via his Web site, http://koreanfilm.org. “There’s a need for people and journalists who know Korean film and know the inside of the industry here,” Paquet said. “For somebody with a good knowledge of Korean and an interest in Korean film, there is a lot of potential.”
Paquet arrived in Korea 10 years ago as a teacher. Like many expats who find themselves on longer-than-expected stints here, he married a Korean. His wife taught him how to speak the language.
He feels that Korean directors need to find a balance between local and international concerns. “A lot of Korean directors are getting a lot of job offers from Hollywood these days,” he said, “but so far they’ve turned them down.”
“It’s easier to get international attention if a director goes to Hollywood and makes a big film there, but in a sense they’ll make more interesting films if they stay here and make films directed at a Korean audience. That’s a choice that local directors are going to have to make,” he said. Citing the examples of Park Chan-wook (“Oldboy”) and Bong Joon-ho (“The Host”), he said, “I think there will be a few directors able to make a big impact on the international scene.”