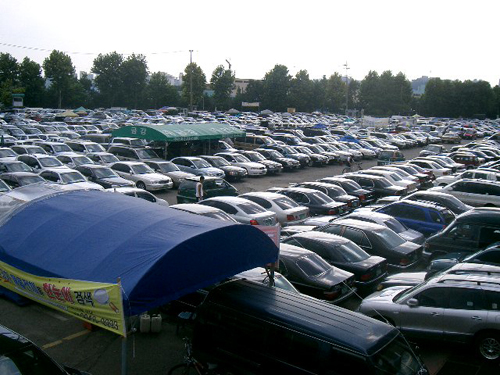 In this new series we look at famous Seoul streets where different industries and shops cluster. Today, we examine Janganpyeong, the center of Korea’s biggest used car market.

Dealers put up jumbo-sized umbrellas at Janganpyeong Used Car Dealer District in eastern Seoul on sizzling summer days. When customers approach with questions about prices, dealers get them to shelter under the umbrellas.

“Unless you have an umbrella, you can get sunburned very easily this time of the year,” said Paeng Ii-sik, one of hundreds of car dealers at the complex.

Once you’re under the same umbrella with the dealer, the first thing you’re asked is the price range and type of car you’re interested in. Talk then quickly turns to options, and colors, paving the way for a tour around the lot that spans more than 20,000 square meters in Seoul’s Seongdong district. The lot also has an eight-story building full of used cars provided by some 50 dealer shops.

The combined number of used vehicles for sale at the market is around 4,000. There are some 114 dealer shops with at least 20 vehicles each, according to Janganpyeong Used Car Association.

The used car district is located near Janghanpyeong Station on subway line No. 5. Although Janghanpyeong and Janganpyeong are spelled differently, they are actually the same place. 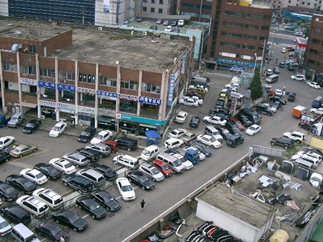 Records show that Janghan was an area where people trained to ride horses during the Joseon Dynasty. But the letter “h” was lifted from the name during the Japanese colonial period in the early 1900s because the Japanese found it easier to pronounce.

Even after Korea escaped colonial rule, the pronunciation Jangan remained and Seoul city established a new administrative district, Jangan-dong by combining parts of Junggok-dong, Neung-dong and Gunja-dong within the Seongdong District.

But Seoul’s city government adopted the name Janghanpyeong when it built a subway station in the mid-1990s.

Janganpyeong Used Car Dealer District dates back to the 1980s, according to the association.

“The birthplace of Korea’s used car market was Euljiro 5-ga in central Seoul.

But it quickly ran out of space and dealers moved to nearby Yongdap-dong in Seongdong District,” said Cheon Gwang-yeol, a used-car dealer in his late 50s. Though the Janganpyeong market remains the number one market, others sprouted around Hwagok-dong and Gayang-dong in western Seoul.

Today, the majority of used-car dealerships in Janganpyeong are run by second-generation dealers. 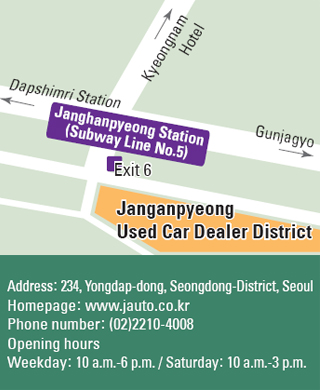 “Well-educated younger dealers aged 28 to 35, sons and daughters of the founders, are trying to bring a breath of fresh air to the industry. They are adopting a more systemized and transparent method of management,” said Cheon.

In 1998, the country’s used-car market surpassed its new-car counterpart in terms of the number of cars sold. That was right after the Asian financial crisis swept through Korea.

As the economy worsened, drivers increasingly sought to buy cheaper and more economical used cars rather than waiting for cars rolling directly out of factories. Some 1.8 million used cars were sold in 2006, up an annualized 4.5 percent. Experts expect that more than 2 million will be sold in 2009. The used-car market in Korea is expected to continue expanding, according to a book written on the subject.

Still, a number of prospective car buyers look dubiously at used cars, largely due to shifty practices by dealers in the past. Some have been known to roll back odometers to raise asking prices.

Today, though, dealers say that a series of reforms have made it almost impossible to deceive prospective car buyers.

Used cars are required to undergo city government inspections before they can be sold. Also the Korea Insurance Development Institute runs a Web site called CarHistory (www.carhistory.com) that can trace a used-car’s history for a fee of 5,000 won ($4.80).

“It has now become technologically impossible to roll back odometers,” Cheon said.

Today, as oil costs have skyrocketed to unprecedented levels, the Janganpyeong market is seeing sales slashed by more than half. While the daily sales averaged around 100 in the past, they tally only about 50 today.

Even so, compact cars with engine sizes smaller than 1 liter, such as Morning from Kia Motors, are sold at a premium of up to 600,000 won. A car fresh out of the factory costs around 10 million won, but buyers today would have to wait until around November to get one. So, instead, they buy used cars.

“It’s all about oil costs. People are increasingly looking for smaller cars with good fuel economy. But popular models stay popular regardless of fuel costs,” said the dealer Paeng.