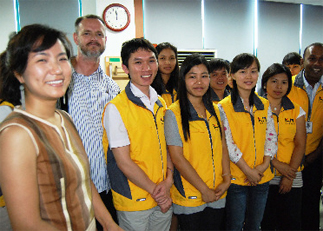 Leslie Chick, second from left, an American pastor at the Migrant Worker’s House in Yangju, Gyeonggi Province, meets migrant workers at the fourth anniversary of the Migrant Workers’ Hospital in southern Seoul. By Moon Gwang-lip

When Dong Changhua, 43, came to Korea two months ago upon hearing about the death of his brother, he never imagined what he would be doing last Friday.

That day Dong was singing in a choir with six other Chinese compatriots at an event to mark the fourth anniversary of the Migrant Workers’ Hospital in southern Seoul.

The hospital had provided free medical services to Dong’s brother, a migrant worker here; when he died recently, the hospital paid for his funeral.

His brother died in an accident outside his workplace. The death is still under police investigation.

“I wanted to do something for the hospital because I feel grateful for the help it gave my brother, both when he was alive and when he died,” Dong said through an interpreter.

Around 200 people, including several lawmakers, attended the event. The hospital has quickly grown in reputation as a sanctuary for around 430,000 migrant workers in Korea.

Located on the second and third floors of the Seoul Migrant Worker’s House in Guro District, the hospital has only four resident doctors besides part-time volunteers.

Pastor Lee Sun-hee, 56, has worked at the hospital since its foundation. She said the hospital needs more state-of-the-art medical equipment and doctors, but the hospital still saves lives and treats ailments.

“Many migrant workers died from colds or appendicitis in the past, but no one has died from these illnesses since the hospital opened,” Lee said.

During Friday’s event, Lee Wan-joo, a 62-year-old pediatrician, was named honorary president. She’s worked at the hospital since its foundation. She used to earn 10 million won ($9,937) a month, but she works for nothing at the hospital.

“Doing something for these migrant workers is more rewarding than a salary,” she said.

Some of the lawmakers and politicians present gave congratulatory speeches, which were warmly received by dozens of migrant workers and volunteers.

Im Young-kil, one of the volunteers, however, said the dignitaries would be appreciated more if they supported the hospital regularly.

“These migrant workers need more than garlands and celebratory remarks. I hope they [the dignitaries] continue to show interest in the hospital and not just on this occasion,” Im said.

He heads a volunteer group called “Love in Yangpun,” which serves food at migrant workers’ centers across the country almost every week. Yangpun is a stainless steel food bowl.

Leslie Chick, 55, is a rare Western figure at the hospital. The American pastor has been working at the Migrant Worker’s House in Yangju, Gyeonggi Province, since 2004. He attended the event along with other staff from the Yangju center.

“Without migrant workers, a lot of companies here will be history,” he said, adding that the government should help build more hospitals for migrant workers.