Bikers’ dream roars along in Seoul

Bikers’ dream roars along in Seoul 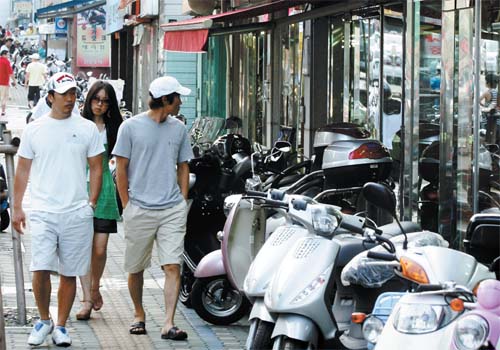 Motorcycles for sale on Toegyero’s motorcycle street in Jung District, Seoul, fill the sidewalk for close to 600 meters. By Jeong Min-kyu

On a sultry afternoon last week, Bae Eun-hee, 25, stroked the seat of an emerald green motor scooter in front of a motorcycle shop in Toegyero, Seoul.

“I was thinking of buying a car this year but decided to settle for a scooter instead because of recent fuel price rises,” she said.

Toegyero, stretching for around 600 meters between Chungmuro Station and Toegye-5-ga in Jung District, has around 100 shops. There are two other motorcycle streets in Korea, in Daegu and Daejeon. Toegyero’s shops sell used motorcycles, Harley Davidsons, domestic bikes as well as imports from Japan, Europe, China and Taiwan. Hondas, Suzukis, Ducatis and numerous other brands line the street. 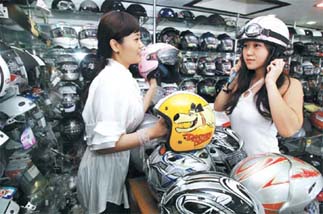 A customer tries on a helmet at Motorlife, a store on Toegyero’s motorcycle street in Jung District, Seoul. By Jeong Min-kyu

“I didn’t want to buy such a pricey item online,” Bae said. “I needed to come here to see the vehicles in person and get information and instructions from the shopkeepers.”

Toegyero began making a name for itself in the 1970s when motorcycle shops began appearing one by one around the Jung District Office.

“Then more shops opened and the street spread to Toegyero-4-ga and Toegyeroe-5-ga,” said Lee Jin-soo, owner of Motor Bank and head of a group of environmentally conscious motorcyclists.

He has been running Motor Bank for over 15 years on Toegyero. “The street was originally composed of shops that sold wholesale. But as motorcycles started becoming popular in the 1980s, they began selling to everyone.”

Toegyero was a natural fit for motorcycles because automobile parts distributors and delivery offices were clustered in Jung District, which was Seoul’s foremost commercial area during the 1970s.

This peaked in the 1980s and continued its run through the mid-1990s, following Korea’s economic growth, until the Asian financial crisis hit, according to most shopkeepers. 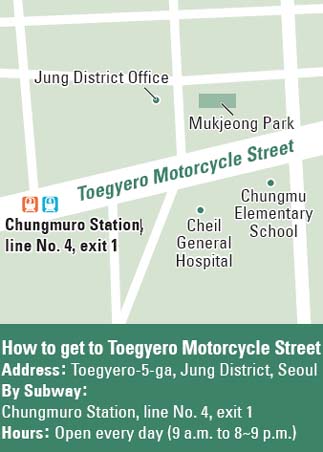 “At first it was bicycles, then motorcycles and then cars. Motorcycle sales started to die down after 1988, when import regulations were eased,” said Park Jeong-gun, owner of Motorlife, who has been selling both used and new motorcycles since the 1980s on Toegyero.

As the Internet started providing customers price comparisons and outlets for buying motorcycles in the early 2000s, customers dwindled even more.

“When my parents were young, they immediately thought motorcycles meant a visit to Toegyero. But now, nobody does that. Kids my age go first to online shopping malls, compare prices and then go to Toegyero to buy a motorcycle at the cheapest price they saw online,” said Bae.

Park can only agree.

“To tell you the truth, before the Internet hit - before the 2000s - shop owners in Toegyero could fudge prices and get away with it. And many did. These days however, there is hardly any bargaining going on because the customers are better informed,” he said. “Even so, because Toegyero has shops selling the same product, which induces competition, the price is 5 to 10 percent cheaper here than in individually standing shops.”

Although motor scooters are fast becoming popular with the younger generation and with women, the majority of sales on the street are China-made motorcycles, which sell for less than 1 million won ($972.86). Park said around 60 percent of sales are of Chinese and Taiwanese bikes in the lower price range.

Motorcycles from Korea, the United States and Japan fill out the rest of the market. Sales of Korean bikes are diminishing, Park said, because “the technology is just not up to par yet as there are only two companies that make bikes in all of Korea.”

“On the outside, they look fine, but the engine and main parts are of such poor quality that after several rides, they start to break down,” said Lee.

Regardless of price, many visitors to the area come just to look at the rows and rows of motorcycles. Kim Geun-yeong, 45, said he owns a Harley Davidson and comes to Toegyero every now and then to look at newer models and buy biking accessories.

“The motorcycle scene in Korea is growing. It’s not as big as, say, in the United States, but more and more young people are taking an interest in them,” Kim said.

Although not as popular as in the 1980s, many shopkeepers agree that motorcycles are staging a comeback. Lee said that sales have gone up around 200 percent in the last year, compared to previous years. As in the past, most of the people who buy motorcycles need them for survival, including delivery drivers. But many are buying for other reasons.

“Especially among younger people including university students, they are becoming afraid to own a car because of fuel prices and are resorting to cute-looking scooters for a fraction of the cost,” he said.

For Korea’s two main motorcycle companies last year, Daelim Motor and S&T Motors, more than half of all sales were motor scooters with engine displacements between 125 and 250 cubic centimeters. In 2005, the scooters accounted for only 26 percent of sales.

Lee added that with the Internet providing a vast array of information on the vehicles, there is a rising interest in premium motorcycles as well.

However, there are other obstacles for motorcycle shop owners in Toegyero. One is the law.

The Constitutional Court ruled earlier this month that motorbikes cannot be driven on expressways. Four people had petitioned to have the rule changed, saying it went against their freedom to work.

“The technology on newer motorcycles is developing day-by-day, but the courts do not realize this. You would think because motorcycles use less fuel than cars and emit less toxic gas than before, lawmakers might be more supportive. But it’s no use, I guess. The bottom line is that if there are no roads for motorcyclists, the business is going to go downhill,” said Park.

Lee said that to awaken the courts to the development of motorbikes in recent years, bikers need to be informed about environmentally-friendly motorcycles.

“It’s simply not acceptable anymore to disregard the environment when riding. Motor vehicles were major polluters during the 20th and 21st centuries, and it’s time for us to take more initiative instead of complaining about restrictions,” he said.