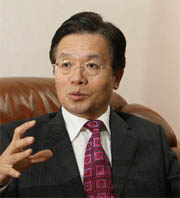 “When one has a close friend in this world, the far ends of heaven seem like next door.”

China’s Ambassador to Korea Ning Fukui quoted these words by Wang Bo, a famous Tang Dynasty poet, in a letter he recently sent to his friends in Korea.

The message of friendship was also a farewell; Ning is scheduled to go back to China in the middle of this month after completing a three-year term as China’s top diplomat in Korea.

Ning counts many Koreans as close friends and says he has a deep affection for Korea. He studied Korean language and literature at Kim Il Sung University in North Korea. He speaks and writes Korean with near-native fluency.

Such an affinity for Korea might seem unusual at a time when Koreans believe that anti-Korean sentiment in China is growing.

The ambassador downplays the notion.

In a recent interview with the Joong-Ang Ilbo, he said the sentiment is shared by only a small fraction of the Chinese people.

“I don’t think there is a serious emotional confrontation between the people in the two countries,” he said.

“Even if such an emotional standoff exists, it does not represent the feeling the majority of the people of both countries have toward each other.”

Having said that, Ning admits many Koreans and Chinese still lack an understanding of each other, which he said is preventing the two nations from becoming closer.

Thus any efforts to broaden mutual understanding, such as the Gyeomttamada campaign, are invaluable, he said.

Gyeomttamada refers to a campaign launched by the Korean community in China, aimed at approaching locals with humility and warm hearts. It is an acronym of Korean words that bear that meaning.

“It is inevitable that problems occur in any bilateral relationship. What is important is how to solve the problem in a reasonable and objective way,” Ning said.

“I think Gyeomttamada is a very constructive campaign as it approaches a problem between China and Korea based on principles of mutual respect, mutual understanding and concession and has specific action plans.”

He also complimented the joint efforts of the JoongAng Ilbo and China’s People’s Daily to resolve the growing confrontation between the two peoples.

The two papers covered the
Gyeomttamada campaign together during the Beijing Olympics. They also decided to work together to clear up any misunderstandings the two nations had toward each other to prevent further animosity.

“While staying here, I befriended many Koreans, and through them I have learned that Koreans generally have a deep affection for China,” Ning said.

“Whatever I do, wherever I go, I will do my best to contribute to promoting friendship between Chinese and Korean people, stability and peace on the Korean Peninsula and the peaceful reunification of the two Koreas.”

By You Sang-chul JoongAng Ilbo [joe@joongang.co.kr]