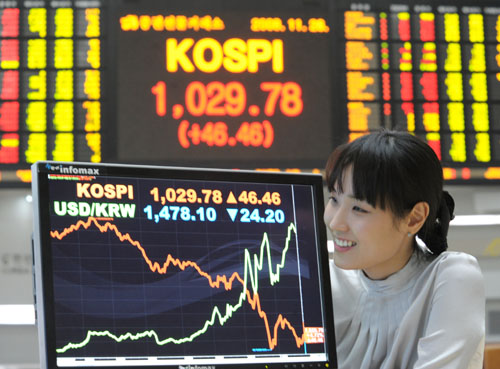 The benchmark Kospi, along with most Asian markets, rose sharply yesterday. [NEWSIS]

“A series of news like a lifeline for Citigroup and the Fed’s fresh rescue plan generally lifted investor sentiment,” said Lee Kyoung-su, an analyst at Taurus Investment and Securities.

Foreign investors snapped up a net 121.7 billion won worth of local stocks on the Seoul bourse, becoming net buyers for the first time in four sessions. The Fed unveiled an $800 billion plan on Tuesday to buy mortgage-backed assets and help boost lending for consumers. Financial shares, led by bank and securities issues, were powered up by the Fed’s plan. Analysts also said the bank gain came as the country’s top financial regulator said that now is not the time for the government to pour public funds into local banks, as the difficulties they face do not warrant an overhaul.