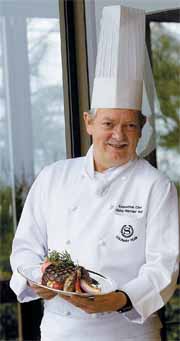 Cooking isn’t all that difficult, according to Hans-Werner Vogt, the executive chef at the Sheraton Grande Walkerhill in eastern Seoul.

All you need are good ingredients, some simple equipment and the desire to cook for those you love.

Vogt’s philosophy as chef coincides with his specialty, which is always based on fresh ingredients and tasty food such as regional dishes from Europe and simple but tasty Asian food. 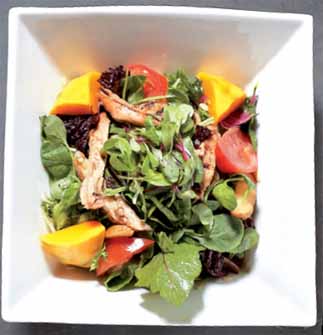 “I came to Korea a second time because I like it here,” he says. “I like the people and many of its traditions as well as the four seasons.”

There is one more reason: He enjoys the many fine restaurants in town, especially Zen Hideaway, an Asian dining and wine bar in Sinsa-dong, southern Seoul.

“Whenever I take my friends to Zen Hideaway they’re surprised to see such a tranquil dining place in the busy streets of Seoul,” he says. “It’s Seoul’s secret sanctuary.”

The ethnic interior design gives him a feeling of comfort and relaxation, and he likes the artificial pond outside the restaurant’s garden surrounded by tropical trees and plants.

There are branches of Zen Hideaway in Sinsa-dong, Myeong-dong in central Seoul and in Hongdae, northern Seoul.

Hans-Werner Vogt, the executive chef at the Sheraton Grande Walkerhill, is from Germany. He started his career as a chef in 1966 as an apprentice in his home country. He has worked in many Asian countries including Hong Kong, Japan and Thailand.